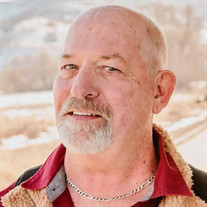 Ricky Allen Bates was reunited with his parents on April 29, 2020, after a courageous fight with cancer. He was blessed to be at home surrounded by his loved ones; whom will miss him dearly. Rick was born on February 3, 1959 to Norma Nye and Earl Bates. He was raised in Heber city, where he met the love of his life Michelle Middlton in 1984. They married in 1994 and together raised four children; Trisha (Robert) Rodgers, Ricky (Crystal) Bates, Nichole (Jeff) Kellerhals, Brieanna (Brandon) Healey. Also, together they raised their grandson Mitch (Hannah) Bates. He was very proud of his children, but his grandchildren (14) and one great grandchild were his pride and joy. Rick would always greet everyone with a smile and a handshake. He was always there to help anyone in need. Many would say he was a "Jack of all trades”, there wasn’t much that he couldn’t do. He was a very hard-working man, who always provided for his family. He was an avid fisherman; he'd grab a pole, make a bologna sandwich, slap the sandwich on the dashboard of the car and off to the lake he’d go. He might have not always caught the biggest fish, or he might have even gotten "skunked”, but he would always come home with some great stories to tell. Being at the lake was his home away from home. Rick was also a huge Denver Bronco fan and he never missed a game. Rick is survived by his loving wife Michelle, children, grandchildren and his brother Dave (Kristen) Bates. Rick was proceeded in death by his parents, Earl and Norma Bates. Also, Michelle’s parents Karen and David Middleton and many other friends and family, whom were taken too soon. As a family, with the joining of friends will be hosting a celebration of life” at a later date. We as a family would love to express our thanks to our mother for taking care of our father in his time of need. Thanks for showing us a true love story. We love you mom! See ya, Dad! Love ya, Dad -- forever and a day! Friends and family may visit the online guestbook and share a memory of Ricky at www.propbstfamilyfunerals.com

Ricky Allen Bates was reunited with his parents on April 29, 2020, after a courageous fight with cancer. He was blessed to be at home surrounded by his loved ones; whom will miss him dearly. Rick was born on February 3, 1959 to Norma Nye and... View Obituary & Service Information

The family of Ricky Allen Bates created this Life Tributes page to make it easy to share your memories.

Ricky Allen Bates was reunited with his parents on April 29,...

Send flowers to the Bates family.