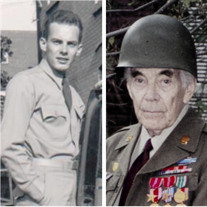 WILLIAM HARLOW CLAYTON “MR. BILL” April 8, 1923 – April 14, 2015 This obituary was written by William Harlow Clayton himself several years ago He asked to include his middle name, Harlow, and said that there may not be anyone left who knew me as “Harlow”, but do it anyway just in case. Born April 8, 1923 in Salt Lake City to William Arthur and Vera Epperson Clayton. Graduate of East High School. Served in the US Army in WWII 1943-1946. Helped to organize the 651st Tank Destroyer Bn in Texas, sent to ASTP Muncie, Indiana; transferred to the Army Air Corps as Aviation Cadet, Merced CA. In April 1944, transferred to and trained with the 66th Infantry Regiment, 71st Infantry Division, Hunter Liggett Military Reservation, CA, and later at Ft. Benning GA. Sent overseas with this unit. Awarded the Combat Infantryman’s Badge, the Bronze Star, two major campaign battle stars as well as other decorations and awards. Was a witness to the Holocaust when elements of his Unit discovered and liberated on May 3, 1945, the Gunskirchen Lager, a concentration camp in North Central Austria. After several months as Army of occupation in southern Germany, discharged from Army in April 1946. Married Bette Schmitz, in Anderson, Indiana. Later divorced. Graduated with a B.A. degree from the University of Utah, earned a Master of Social Work Degree from Denver University and later a Ph.D. in Educational Psychology from the U of U. Married Elizabeth Lyn Hampson Anderson in the Salt Lake Temple, Sept 7, 1978. Employed by the Department of Veteran Affairs Medical Centers in Denver and in Salt Lake in various clinical, research, and administrative positions in their Mental Health Department. Retired in 1980, then employed by the Salt Lake City Head Start Program as Social Services Coordinator. Specialized in concerns of early childhood development and child rearing skills. Retired in 1993. Volunteered at the Midway Elementary School to work with students in their reading improvement program. Past President of the Utah Chapter, National Association of Social Workers. Associated in past years with the University of Utah, College of Social Work as Assistant Clinical Professor of Social Work. His greatest love and admiration went to his wife, Lyn, and to his family. His daughters, Barbara Bradshaw (Cal), Courtney Montgomery (Robert), and his step-children Jolyn Dickey (deceased), Christy Rogers (Gary), Scott Anderson (Angelle), Kim Anderson (deceased) (Sandra), Cindy Castleton (Dave), Tracy O’Sullivan (Ed), Troy Anderson (Kat), and Laurie Lythgoe (Lane). Preceded in death by his wife and his brother, Robert. Survived by his sister-in-law Marilyn Clayton, nieces, nephews, cousins, 35 grandchildren, and 77 great grandchildren. A member of the Church of Jesus Christ of Latter-day Saints. He was a High Priest. He served in the Sunday School Presidency, Assistant Ward Clerk, Assistant Stake Clerk, High Councilor, Temple Worker, Stake Missionary, and Public Relations Representative. His greatest hope was that after many years of striving, learning, and re-learning, he finally left his immediate environment a few little ways better than when he found it. Bill passed away peacefully and quietly at the Central Utah Veterans Home in Payson. The family expresses appreciation for the loving care he received. Services will be held at the Midway 2nd Ward Chapel, 1102 South Center Street, Midway, UT. Wednesday April 22nd. Viewing from 10:30 AM to 12:30 PM. Funeral to follow at 1 pm. To be interred in the Midway City Cemetery.

The family of William Harlow Clayton created this Life Tributes page to make it easy to share your memories.

Send flowers to the Clayton family.