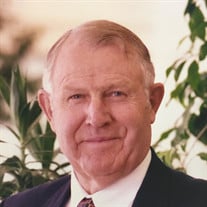 Wayne W. Probst passed away peacefully at his home in Midway, Utah on September 19, 2019 with his loving family by his side. He was born April 3, 1929 to Joseph E. and Garnet Watkins Probst of Midway, Utah. He graduated from Wasatch High School in 1942 then served a two year mission for the Church of Jesus Christ of Latter-day Saints to the North Western States Mission. Upon his return he attended Brigham Young University where he majored in Agricultural Economics and Agronomy, Elementary and Secondary Education. Wayne married Audrey Mary Hicken on March 20, 1953 in Salt Lake City Temple for time and all eternity. Together they raised five boys and a daughter in Midway, Utah. Wayne served our nation in the Air Force as a Navigator on Aerial Tankers (1955-1957) that fueled aircraft while in flight. He was stationed in Austin, Texas and Anchorage, Alaska. Wayne taught school in Park City, Utah and was later hired by The Federal Land Bank of Berkley as an Agriculture Appraiser. Eventually he became the President of the Federal Land Bank Association of Utah. Upon retiring he worked as a fee appraiser of Agricultural properties of all kinds. During those years he continued to own and operate a small ranch in Midway, Utah. Wayne loved the Gospel of Jesus Christ and served faithfully in many callings including Missionary, Bishop for nine years of the Midway 2nd Ward, High Councilor, the first Stake President of Midway, Utah, Mission President of the Pocatello, Idaho Mission (1991-1994); Temple ordinance worker and his beloved position as Sealer in the Provo Temple. He is survived by his children, Joe (Marsha) Probst Midway UT, Kimball (Susan) Wellsville UT, John (Jayne) Probst Truro IA, Mark Probst Midway UT, Ben (Nannette) Probst Midway UT and Annette (Dan) Swainston Bakersfield CA, 19 Grandchildren and 25 Great-Grandchildren. He is preceded in death by his Wife, Audrey, a granddaughter, his brother and his parents. Funeral services will be held, September 24, at 11:00 am at the Fort Midway Ward Chapel, 1105 South Center Street, Midway, UT. A viewing will be held at the same location on September 23, from 6-8:00pm and prior to the service from 9:30-10:30 am. The family would like to thank Eilene Whiting and Renew Hospice for their love and service as they helped the family during this difficult time. We are ever so grateful.

Wayne W. Probst passed away peacefully at his home in Midway, Utah on September 19, 2019 with his loving family by his side. He was born April 3, 1929 to Joseph E. and Garnet Watkins Probst of Midway, Utah. He graduated from Wasatch High School... View Obituary & Service Information

The family of Wayne W. Probst created this Life Tributes page to make it easy to share your memories.

Wayne W. Probst passed away peacefully at his home in Midway,...

Send flowers to the Probst family.