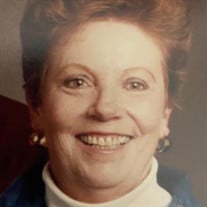 When the music stopped the dance ended on March 21, 2022. I was born on February 23, 1937, in Park City, Utah to Samuel and Erna (Popp) Williams. I was educated in the Park City schools and graduated in 1955. During that time, I played the saxophone for the Park City School Band for 8 years, we traveled to parades around the state and played at various venues and school events. In the Spring of 1953, we played at a Black Hawk celebration in Heber City where I met my dance partner and soon to be husband, Merrill Sanchez. We were married the following year on August 21, 1954. We had 3 children, Tangee, Kerry and Tlesa. Merrill and I were part owners in the Silver Wheel Theater in Park City for 17 years. Growing up I worked at Pop Jenks it was great to be a part of the Jenks family. I was also an administrative manager for Jerry Clark who had the first food concession at the Park City Ski Area in 1963. I then went to work for IML freight where I worked with some great teamsters. After the trucking industry deregulated, I worked for the Silver King Bank in Park City. Boy did I have fun working with that group of ladies. After retirement Merrill and I moved to Montana to be near our 3 grandchildren. Our days there were very special, we started each day out with a dance. I enjoyed traveling in our 5th wheel and exploring Montana, Alaska, Arizona and Utah. I enjoyed the beauty of Montana and walking many miles through the Lee Metcalf refuge. I quilted with a group of women every Tuesday and we all became dear friends. After Merrill passed in 2016, I moved back home to Utah because of health issues. I lived in Highland Cove for a year where I met lots of fun people. In December of 2020 I was diagnosed with Triple Negative Breast cancer and moved up to Peoa where my darling daughter and her husband graciously moved all my crap into their home, this is where I spent my final days. Preceded in death by my dance partner Merrill, parents Sam & Erna Williams, brothers Sam and Darrell Williams, son in-law Justin Uriarte. In-laws Alfonso and Eva Sanchez, brothers in law, Dean and Maynard Sanchez Survived by Tangee Uriarte, Kerry Sanchez, Tlesa (Jeff) Riehl, 8 grandchildren Justin (Megan) Uriarte, Chris (Sharlott) Uriarte, Amanda (Chris) Henley, Marci (Tyler) Clark, Alexis (Colby) Zimmerman, Brevin Riehl, Nick (Maddie) Hammond and Jason Hammond. 9 great grandchildren. Brothers in law, Ray (Mary) Sanchez, Ben (Claudia) Sanchez and many nieces and nephews. The family would like to thank Applegate Hospice and especially Trisha, you are an Angel!! A celebration of life will take place later in the summer.

When the music stopped the dance ended on March 21, 2022. I was born on February 23, 1937, in Park City, Utah to Samuel and Erna (Popp) Williams. I was educated in the Park City schools and graduated in 1955. During that time, I played the... View Obituary & Service Information

The family of Viola Rae Williams Sanchez created this Life Tributes page to make it easy to share your memories.

Send flowers to the Sanchez family.