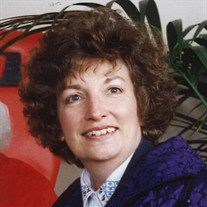 Verda L. Lewis passed away unexpectedly on Monday, December 16 at her home in Park City, Utah. She was born on August 16, 1943 at her home in rural Grant County. The daughter of Rolly and Fanny Lighty (deceased), she was the youngest of eight children. After graduating from Ulysses High School in 1961, she attended college at Anderson College in Anderson, Indiana and at Kansas State University where she earned a Bachelors degree in Home Economics in 1966. Verda and Richard (Rick) Lewis were married in Ulysses on January 28, 1962 and they lived in Omaha, Nebraska for 3 years before moving to Minnesota. After living in Minnesota for 17 years, they moved to Utah in 1990. She is survived by her husband Rick, living in Park City, Utah at their home of 30 years along with their beloved Beagle dog, Heidi. Verda is survived by her brothers, Roy Lighty (deceased), Howard Lighty (deceased), Kenneth Lighty and Clyde Lighty, her sisters Ester Cantley (deceased), Ruby McKinley, Roberta Faubion and many nieces and nephews. Verda and Rick fell in love with the mountains and the beautiful environment in and around Utah. Fueled by their shared passion for travel, adventure and camping, they traveled extensively throughout the West from Canada to the Mexican border observing and photographing nature and the wildlife living there. She enjoyed all of their pet beagles over the years and had a special affinity for the moose, deer, birds and other wildlife that visited their home. She loved the local environment and often commented about how wonderful the Utah seasons were. Her enthusiasm for celebrating holidays, special events and life endeared her to friends, neighbors and coworkers. Verda wished to be cremated and her ashes spread at her favorite special places in the Intermountain West. Condolences may be sent to: Heber Valley Funeral Home (288 North Main Street, Heber City, Utah 84032). Memorial contributions in lieu of flowers may be sent to her favorite charity: Best Friends Animal Society 5001 Angel Canyon Road Kanab, UT 84741 Farewell Verda, you will be deeply missed.

Verda L. Lewis passed away unexpectedly on Monday, December 16 at her home in Park City, Utah. She was born on August 16, 1943 at her home in rural Grant County. The daughter of Rolly and Fanny Lighty (deceased), she was the youngest of eight... View Obituary & Service Information

The family of Verda L. Lewis created this Life Tributes page to make it easy to share your memories.