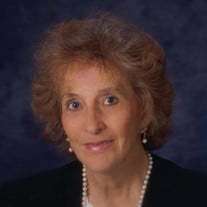 Velma Ford, age 94, was born on March 17, 1927, in Daniels, Utah, to Albert Wells Mecham and Sarah Ellen Humes. She passed away peacefully in her home surrounded by her family on April 13, 2021. Velma was raised on Rose Hill in Wallsburg where she rode horses, swam in the creek behind her house, and helped raise her siblings because of her mother’s disability. She grew up baking 6 loaves of bread every day, making dinner for her brothers and sister, and yet still had time to attend dances at the old Wallsburg School. One day as she was riding her horse back home, she met the love of her life, Reed, as he hollered, “Where have you been my whole life?” They were married in Cedar City on April 22, 1946, in The Old Stone Church, and later their marriage was solemnized in the Salt Lake Temple on Dec 19, 1946. Velma attended Wasatch High School and spent the next few years working and keeping herself busy while waiting for Reed to return from World War II. After they were married, they build a home in Wallsburg and raised their 5 children on a dairy and poultry farm. She was a great support to her husband as she served in her many church callings. Her children were her life. Her joy came from being a mom and a grandma. She loved serving in the community and fulfilling her church responsibilities. Velma loved gardening and flowers. She spent her summers watering and weeding and loving every minute of it. She lived a Christ-like life and showed her love to her neighbors by sharing her tomatoes, zucchini, and all other garden produce with her friends and neighbors. She had the most coveted rhubarb patch in Wallsburg and everyone that drove by stopped to see the famous “Ford Fence.” Velma is survived by her 4 children; her daughter Coleen (Peter) Nielsen; her three sons, Kraig R (Brenda), Roger R (Jill), Mark R (Jill); and her son-in-law, Rob (Korby) O’Driscoll. She leaves twenty-four grandchildren, thirty-seven great grandchildren, and one sister, Violet (Vernon) Jaques. She is preceded in death by her husband, Reed Ford; her daughter, Sheri O’Driscoll; her grand-daughter, Misty O’Driscoll, great-grandson, Ashton Birk; and her 6 brothers. A graveside service will be held for family on Saturday, April 17th, 2021. Condolences may be shared online at www.probstfamilyfunerals.com.

Velma Ford, age 94, was born on March 17, 1927, in Daniels, Utah, to Albert Wells Mecham and Sarah Ellen Humes. She passed away peacefully in her home surrounded by her family on April 13, 2021. Velma was raised on Rose Hill in Wallsburg where... View Obituary & Service Information

The family of Velma Ford created this Life Tributes page to make it easy to share your memories.

Send flowers to the Ford family.