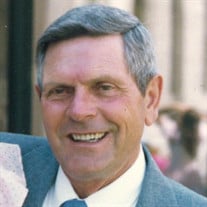 Our father, grandfather, great grandfather, brother and friend, Vaun A. Shelton, passed away peacefully on May 25, 2016 due to the effects of advanced Parkinson’s disease. Vaun was born February 24, 1932 in Heber Valley. He was the sixth of nine children born to Charles Albert and Maud Ella Watson Shelton. He graduated from Wasatch High School in 1950. He married Velda Graham on February 5, 1954 in the Salt Lake City Temple. His employment took him to Wendover, Utah, where he worked for Potash Chemical, Houston Housing, and the Western Pacific Railroad. He moved his family back to Heber in 1974 and continued employment with the Union Pacific Railroad, retiring after 38 years of service. Dad had an excavating business for many years in Heber. Our Dad’s strong work ethic, fairness, and skill made him many friends and blessed the lives of his children, who were able to work with him as he worked for and served many people in the Heber Valley. Vaun was active in his church, serving in two bishoprics and in his community on two city councils. In the golden years as their health declined, mom and dad were a great team, as they filled in each others gaps. He is survived by his wife Velda. Children are: Susan Nielson (Todd) of Orem; Kent Shelton (Janet) of Heber; Wayne Shelton (Lilian) of Orem; Paul Shelton (Jennifer) of Heber; and Carolyn Fuller (Russell) of Heber. He has 13 grandchildren and 4 great grandchildren. Vaun’s living brother and sister are David Shelton (Lettie) and Ann Erickson. Vaun was preceded in death by his parents, sisters Mary Lou, Jeanne Fitzgerald (Clark), Beth Moulton (Dick), Anita Moulton (Barton) and brothers Grant Shelton (Darlene), Charles Shelton (Connie). Funeral Service will be held at 11:00 a.m., Tuesday, May 31, at the Heber 8th Ward Chapel on 650 S. South Field Road, Heber, Utah. Family and friends are invited to visit on Monday, May 30, from 6:00-8:00 p.m. at the same location or 9:30-10:30 a.m. prior to the service at 11:00 a.m. Internment will follow the services at the Heber City Cemetery.

Our father, grandfather, great grandfather, brother and friend, Vaun A. Shelton, passed away peacefully on May 25, 2016 due to the effects of advanced Parkinson&#8217;s disease. Vaun was born February 24, 1932 in Heber Valley. He was the sixth... View Obituary & Service Information

The family of Vaun A. Shelton created this Life Tributes page to make it easy to share your memories.

Send flowers to the Shelton family.