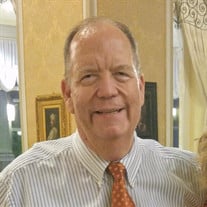 Val Dee Warnick passed away Thursday, February 20th, 2020, at the Utah Valley Hospital due to complications from cancer. Val will always be remembered as a wonderful father, grandfather, loving husband, and friend. He was known for his kindness, pleasant sense of humor, and someone you could always count on. Val was born on March 23rd, 1950, in American Fork, Utah, the 4th son of Charles William Warnick and Blanche Richards Warnick. He grew up on a dairy farm in Pleasant Grove. Farm life contributed to Val's strong work ethic and life-long career as a Utah Extension Agent in both Box Elder and Wasatch Counties. During those 25 years as an extension agent, he also enjoyed working with the 4-H program, watching kids gain and develop life skills. He was a dairy farmer through and through and loved working with the dairy people in Wasatch County and around the state. Val married Susan Wardell, the love of his life, January 28th, 1983. They were sealed one year later in the Jordan River Temple. They enjoyed serving together as temple workers after they both retired. Val was an Eagle Scout. He served in the National Guard during the Vietnam War. He also served as a missionary in Brazil for The Church of Jesus Christ of Latter-Day Saints. Val attended BYU and USU, receiving his master's degree from Utah State University. Val acted as editor of the Utah Holstein Annual Magazine and served on the Utah State Holstein Board for 20 years. He volunteered on countless local, state, and federal committees, where he was awarded several Distinguished Service Awards. Val was a devoted member of the LDS church and served in numerous callings, one of his favorites as a primary teacher with Susan. He had a strong testimony of our Savior, Jesus Christ. Val was an avid reader, loved working in his yard, especially gardening. He loved all kinds of sports, especially BYU, USU, and the Jazz. After retirement, Val and Susan enjoyed traveling together. One of his favorite vacations was a trip to Hawaii with all of his children and grandchildren. He is survived by his wife Susan Warnick; daughter, Heather Rasband (Jeff); daughter, Debbie Warnick; son, Mike Warnick (Becky); brother Terry Warnick (Sandy), brother Doug Warnick (Sharon), brother Bill Warnick (Diana), and nine grandchildren. He was proceeded in death by his parents, Charles and Blanche Warnick, daughter DeAnn Warnick, and granddaughter Callie Warnick. Funeral services will be held at The Fox Den Ward (250 East 200 South, Midway) Friday, February 28th, 2020 at 11:00 AM. A viewing will be held that morning from 9:30 AM - 10:30 AM, as well as Thursday evening, February 27th from 6:00 PM - 8:00 PM (same location). Interment will be at the Midway Cemetery. Friends and family may visit our online guestbook and share a memory of Val at www.probstfamilyfunerals.com.

Val Dee Warnick passed away Thursday, February 20th, 2020, at the Utah Valley Hospital due to complications from cancer. Val will always be remembered as a wonderful father, grandfather, loving husband, and friend. He was known for his kindness,... View Obituary & Service Information