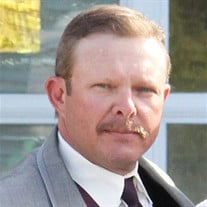 Troy K. Wall, age 50, passed away peacefully in his home on August 19, 2014. He was born December 24, 1963 in Provo, Utah, the son of the late Bill Wall and Karolyn Wall Kelly. Troy brought a special life to his parents. He was raised and grew up on the “Wall Dairy Farm” in Center Creek, Utah. He enjoyed all aspects of the dairy; including milking cows, farming, equipment, and especially the play time. Troy was a natural at anything he tried; rodeo, wrestling, football, and he thoroughly loved the outdoors. At the tender age of 14 he lost his father and it changed his life forever. We can only imagine the reunion that these two are sharing. He learned at a very young age how to take care of his family and the value of hard work. He continued to help operate the dairy farm with his two brothers and his Grandpa Russell. During this time, Troy enjoyed the wonderful time he spent with his brothers. The three Wall boys were always together. They spent countless hours working on the farm, hunting, camping, 3-wheeling, and riding horses. He graduated Wasatch High School in 1982. Troy married Shawna Lee McPherson on July 27, 1984 (later divorced). He was employed at Geneva Steel for many years and later went to work for Wasatch County for 17 years. His greatest enjoyment in life was his family. He loved every second spent with them. Troy had a special place in his heart for his grandchildren and was very proud to be a Grandpa. He was a wonderful son, father, and especially a great “Bumpa”. Troy was active in the LDS church and served many callings throughout his life. Troy was a hard worker and had a quick wit. He had a giant heart and was a great leader. Troy is survived by his mother, Karolyn Wall Kelly and stepfather Lamar Kelly. Children: Megan (Riley) Probst, Eli (Sara) Wall, Amanda (Trevor) Barfuss, and Sophia Leigh Wall. Grandchildren: Carter and Hallie Probst, Hixson Wall, and Elsie Barfuss. Brothers: Todd (Tamara) Wall, Chad (Zenda) Wall, and many nieces and nephews. Preceded in death by father Bill Wall, grandparents Willard and Dorthy Kohler, and Russell and Vilate Wall. Viewing will be held on Sunday August 24th from 6:00 – 8:00 P.M. at the LDS Church 1205 W. 650 S, Heber, Utah and Monday August 25th, from 12:30 to 1:30 P.M. Funeral Services will be held on Monday August 25, 2014 at 2:00 P.M. also at the church. Interment will follow the services at the Heber City Cemetery.

Troy K. Wall, age 50, passed away peacefully in his home on August 19, 2014. He was born December 24, 1963 in Provo, Utah, the son of the late Bill Wall and Karolyn Wall Kelly. Troy brought a special life to his parents. He was raised and... View Obituary & Service Information

The family of Troy K Wall created this Life Tributes page to make it easy to share your memories.

Troy K. Wall, age 50, passed away peacefully in his home on August...

Send flowers to the Wall family.