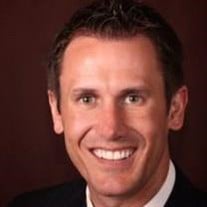 Troy L. Atkinson of Las Vegas, Nevada, passed away on December 28, 2016 after an inspiring fight with colon cancer. Troy was born in Las Vegas, Nevada on August 1, 1977 to Sheila and La Vell Atkinson. He graduated from Western High School in 1995, obtained his Bachelors of Science degree from University of Nevada at Las Vegas in 2001, and his Juris Doctorate from University of San Diego School of Law in 2004. He had a passion for his legal studies and enjoyed his participation on the school’s National Mock Trial Team. Troy was an outstanding lawyer. His warm personality and sharp intellect endeared him to clients, colleagues, and judges. He was routinely recognized as one of the top attorneys in Nevada by his peers. His career began in 2004 as an insurance defense attorney at McCormick, Barstow, Sheppard, Wayte & Carruth LLP. In 2007, Troy joined the national law firm of Snell & Wilmer, practicing primarily in the areas of corporate and banking litigation. In 2009, Troy formed the Law Offices of Troy Atkinson PLLC, where he represented thousands of distressed homeowners in loan modifications, short sales, and other default and delinquency matters. In 2010, Troy founded the law firm best known as Battle Born Injury Lawyers, where he was universally loved by his partners and employees. Troy was an avid sports fan, cheering for his Lakers, 49ers, and Runnin’ Rebels. He rarely missed a UFC event, and always kept a close eye on his many fantasy football teams. His love of sports and for his firm was evident in his routine appearances on ESPN Radio in Las Vegas, where he discussed legal issues in sports. Most importantly, Troy loved his many friends and his large family. He often spoke of family vacations in Brian Head, Utah and traveling around the world with his friends. He ran with the bulls in Pamplona, Spain and watched his favorite musician, and childhood friend, Ronnie Vannucci of the Killers, perform in Ireland. Troy is survived by his parents, Sheila and La Vell Atkinson of Las Vegas, his siblings, Valerie Mifflin and her husband, Mark of Salt Lake City, UT, James Atkinson and his fiancée, Hilliary Heard of Las Vegas, and Brett Atkinson and his wife Kalai of Las Vegas, 8 nieces and nephews, 2 grandnieces and 1 grandnephew, his many friends and colleagues, and his angel, Adriana.

Troy L. Atkinson of Las Vegas, Nevada, passed away on December 28, 2016 after an inspiring fight with colon cancer. Troy was born in Las Vegas, Nevada on August 1, 1977 to Sheila and La Vell Atkinson. He graduated from Western High School in... View Obituary & Service Information

The family of Troy L. Atkinson created this Life Tributes page to make it easy to share your memories.

Send flowers to the Atkinson family.