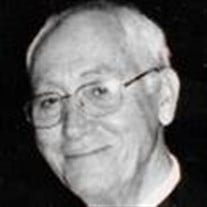 Thomas Patrick Phillips November 3, 1936 - August 3, 2018 Tom Phillips, age 81, died peacefully at his home on August 3 in Park City, Utah. He was comforted by his loving wife of 50 years, Kathleen (Schirf), and their children. Tom was born in Upper Darby, Pennsylvania. He was the youngest of 6 children-1 sister and 4 brothers, raised by his widowed mother. He spent 8 years at Scotland School for Veterans Children, and later graduated from West Catholic High School in Philadelphia. He earned both Bachelor's and Master's degrees in Hotel and Restaurant Management from Penn State University, where he met Kathleen. After their marriage in Milwaukee in 1968, they moved to northern Wisconsin where Tom was a Professor at the University of Wisconsin - Stout, in Menomonie, for 30 years. While Tom's primary career was in academia, he was also a successful real estate investor. Tom and Kathleen raised five wonderful children. Tom (Alicia), and children Sam, Maggie and Jacob; Dr. Christine Phillips Heskett(John), and children Ben, Matthew and Jane; Matthew and daughter, Ella; Ellen Carse (Sean) and children Greta, Wesley, Lucy and Norah; Stephen (Dr. Carrie), and children Charlie, Violette and Dolly. In addition to his immediate family, Tom had the loving support of Kathleen's brothers, Skip and Greg Schirf and their families, long-time residents of Park City, Utah. Tom and Kathleen traveled the world and spent their retirement years between homes in Puerto Vallarta, Mexico and Park City. He enjoyed reading and loved a good political debate, especially if the more progressive side came out the winner. Tom loved to sing and was asked by his family to make a CD of all the songs he sang to his children at bedtime. It was also a family tradition that he made pancakes every Saturday morning. Tom will be remembered and toasted as a loving, devoted husband, and a terrific and dedicated father-even though he never had a father as a role model. Friends of the Phillips, Schirf, Heskett and Carse families are invited to an Irish Wake in the honor of Thomas Phillips being held at the Wasatch Brew Pub, on Thursday August 9, from 5:00 p.m. - 8:00 p.m. Beer, wine and appetizers will be served. In lieu of flowers, donations to your local Hospice are encouraged. A special family thank you to the hospice team at Applegate Home Care & Hospice - Park City.

Thomas Patrick Phillips November 3, 1936 - August 3, 2018 Tom Phillips, age 81, died peacefully at his home on August 3 in Park City, Utah. He was comforted by his loving wife of 50 years, Kathleen (Schirf), and their children. Tom was born... View Obituary & Service Information

The family of Thomas Partrick Phillips created this Life Tributes page to make it easy to share your memories.

Send flowers to the Phillips family.