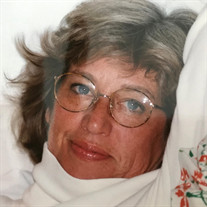 Susan Butler Miles September 9, 1943 – March 17, 2019 Susan Butler Miles respected mother, wife and friend died at home in the loving arms of her children Sunday, March 17, 2019 after a courageous battle with cancer. If you knew my mother, you would be surprised that she left anything to chance, giving me the gift of recording sentiments from her life. Born September 9, 1943 to Constance and Edmund Butler, Susan was an early community builder. She and her group of neighborhood friends formed a club, “The Happy Hackers”, writing a newsletter of happenings of Park Circle, Short Hills, NJ, which most famously documented the “sniffings” of the neighborhood dogs. Her beloved companion Frisky providing much of the scoop. In 1964 Susan moved to New York finding employment at NBC as a production assistant to the Today Show. There she met my father, James J. Miles, a handsome devil whose first comment upon seeing her was that NBC had “finally hired a nice set of legs.” While it would be frowned upon today – the man had swept her off her feet. The couple married in 1967 remaining ever faithful in love, laughter and adventure until his passing in September 2014. Her professional career was a veritable tale of success. She will be most remembered for her roles of first Executive Director of Sail Newport, Newport, RI and business co-founder of Media Pro International also in Newport. In the months ahead and days following her death friends, neighbors and community members (of Short Hills, NJ, Westbrook, CT, Newport, RI and Park City, UT) were quick to recall fond memories reflecting upon her strength of character, generosity of spirit, and immense love of life. Susan never lost her sense of humor, even when faced with imminent death, telling a friend who visited her bedside “I’m charging admission. Give me fifty cents and I’ll bore you to death.” If reading this, hug a friend, plant a flower or offer a kind remark to a stranger to honor her. It will be treasured by her family. Susan was preceded in death by her husband James J. Miles. She is survived by her grateful children Heather Miles Pike and Jay Miles, their loving partners Buster Pike and Portia Naze, and her grandchildren Wyatt Pike, Hazel Pike, Parker Miles and Hadley Miles all of Park City, UT. (We all moved here because my parents were having so much fun in this glorious playground!) A celebration of life will be held June 16th 2019 in Park City, UT when things are in bloom again. In lieu of flowers, donations in her name may be made to Sail Newport, Newport, RI or Red Butte Garden, Salt Lake City, UT. Friends and family may visit the online guestbook and share a memory of Susan at www.hebervalleyfuneral.com

The family of Susan Butler Miles created this Life Tributes page to make it easy to share your memories.

Send flowers to the Miles family.