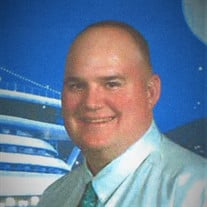 Steven Lamont Provost, passed away peacefully, after a valiant battle with heart and lung problems on August 9, 2019, finally set free from his earthly trials. Steven was born October 19, 1961 to Junior and Darl Provost. They were extremely excited over his birth, as he was the first son after two daughters. Steven grew up loving sports, basketball being his favorite. He excelled in basketball, and he and Jay would shoot hoops out in the back, where his dad had made them a small court to play on. Sometimes they would shoot until 2am and the neighbors would get tired of the noise. He had met Lisa Olsen when he was in 9th grade and she in 7th. They both felt the magic, but he still loved his basketball. She eventually became the love of his life and basketball came second. His senior year of high school, he was named All-State team member. He graduated from Wasatch High School May of 1980 and married the love of his life shortly after. Lisa and Steven had their marriage solemnized in the Salt Lake Temple April 3, 1981. They had three children: Shane, Shawna and Shalisa. Steven adored his children. His wife and children were his whole world, in every sense of the word. Their love for one another was unfounded. No matter what trial was presented to them, if there was a Steven, there was a Lisa. The love they shared radiated and was magical when they looked at each other. As a young boy, his father instilled in him a hard work ethic, and this carried over through out his life, passing it on to his son Shane, and all his fellow co-workers. He was well respected by those he worked with and worked for. He spent many years in the grocery retail business, starting at Safeways, Farmer Jacks, Doves (a short time) and eventually ending at our local Smiths, where he was Assistant Store Manager until he retired four years ago. Steven worked extremely hard and was always acknowledged for his hard work. But then, he learned to play hard too. He loved the deer hunt, and started hunting with his dad and brother when they were old enough to pack rifles. As soon as his son Shane was old enough to go, he passed this love of hunting onto him also. He was an avid hunter and fisherman. Then there was the time he spent working with his German Shorthairs, and the pheasant hunts. His first fishing trips were with his dad over on Little Snake Creek. Then his grandpa Blackley would take time to Strawberry with him to fish. Later he went big and bought a boat and discovered how much fun it was to take it out to Flaming Gorge where his father-in-law Les Olsen managed the boating arena. He and Lisa would go out there and fish and visit with Les and others that were camped there. He spent many summers out there and one summer he sent his wife and girls on a cruise and he spent his time on the boat at Flaming Gorge. He also shared his fun with his brother Jay and had many good times out there with great memories, along with many of his co-workers from Smiths. Lisa and Steven had the opportunity to travel through his work, and they had many fun and exciting trips to Hawaii with Ralph and Kim Duke. They enjoyed some cruises, and were blessed to take a cruise with his mom, and siblings to Alaska in 2010. Of course, he went fishing in Ketchikan, and caught his allotment of Salmon. Steven loved his family, his wife, his son, his daughters, and his siblings. He had a very close relationship to his brother. You had to know Steve, to know how much his family really meant to him. He cherished his parents, and missed them both so much when they passed on. Steven is survived by his wife, the love of his life, Lisa; his son Shane and wife Rachael; daughter Shawna and husband Bill, and daughter Shalisa. He is also survived by eight grandchildren; Paisley, Carter, Sage, William, Maddox, Beckham, Drake, and Journey. Sisters; Dawnette Clyde, Julie and Wayne Hardman; brother Jay and Cindy Provost; brother-in-law Brad Olsen and brother-in-law Jason Olsen. He was preceded in death by his parents, Junior and Darl Provost, Les and Joyce Olsen, Lori Olsen, and Brian Olsen. Funeral Service: Friday, August 16, 2019 - 12 noon - North Stake Center (521 E. 500 N., Heber City, UT) Viewing: Thursday, August 15, 2019 - 6pm to 8pm - North Stake Center Viewing: Friday, August 16, 2019 - 10:30 am to 11:45am – North Stake Center - prior to the service. Interment will follow funeral service at the Heber City Cemetery.

Steven Lamont Provost, passed away peacefully, after a valiant battle with heart and lung problems on August 9, 2019, finally set free from his earthly trials. Steven was born October 19, 1961 to Junior and Darl Provost. They were extremely... View Obituary & Service Information

The family of Steven Lamont Provost created this Life Tributes page to make it easy to share your memories.

Steven Lamont Provost, passed away peacefully, after a valiant...

Send flowers to the Provost family.