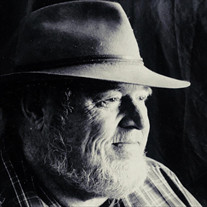 Stephen Leon Gale 71 passed away unexpectedly in his sleep on October 20, 2019 in Mantua, Utah. Stephen was born February 19, 1948 in Blackfoot, Idaho to Arvene and Miriam Gale. His work ethic started as a young boy while working on local farms to help provide for his family. At 18 years old he entered the Army, where he served honorably for three years in various locations including Vietnam and Panama. On February 5, 1970 he married his sweetheart Madeleine Moulton in the Salt Lake LDS Temple. Stephen graduated from Brigham Young University with a Bachelor’s Degree in Education and Fine Arts. He went on to teach 32 years at Wasatch High School where he was able to share his passion for art with his students. Stephen’s passion for art expanded as technology grew. He was a self-taught graphic designer which made way for him to open his own graphic design business. Even with computer graphics taking over, he never left behind the passion of water color, acrylic, and pencil art. Creating with his hands brought continual joy to him and those around him. When he wasn’t in the class room or his art studio creating, he was working in law enforcement. Stephen spent many years as a Deputy for Wasatch County Sheriff’s Department and a Ranger for the Uintah National Forest. Summers were spent with his wife and five kids in a cabin located in Mill Hollow, where he worked full time as the ranger. Stephen had a passion for the outdoors. While young he rode horses, hiked, snow-shoed and cross country skied. Stephen is a devoted member of the Church of Jesus Christ of Latter-day Saints where he held many callings in the ward and stake. His favorite of all the callings was teaching primary where he got to share his love for Christ with the children. Stephen is survived by his wife Madeleine Moulton and five children Adam (Christy) of Eagle Mountain, Matthew (Jill) of Provo, Joseph (Jennifer) of Eagle Mountain, Elizabeth (Richard) Seiler of Heber City, Esther (Anthony) Hatch of Mantua and his grandchildren, Corbin, Lindsay, Brooklyn, Gavin, BrookLynn, Bentley, Sky, Damien, Marissa, Tristan, and Diesel. He is also survived by his stepmom Avata Gale of Mesa Arizona, two brothers, and one sister. He was blessed to have a great relationship with his nieces and nephews. Preceded in death by his Mother, father, and brother. A viewing will take place Monday, October 28 from 6-8pm at the Heber Valley Mortuary, and Tuesday from 9-10am at 241 East 400 South in Heber. Funeral services will take place at 10:30am following the viewing. Dedication of the grave will take place in Mantua, Utah where he recently moved with his wife.

Stephen Leon Gale 71 passed away unexpectedly in his sleep on October 20, 2019 in Mantua, Utah. Stephen was born February 19, 1948 in Blackfoot, Idaho to Arvene and Miriam Gale. His work ethic started as a young boy while working on local... View Obituary & Service Information

The family of Stephen Leon Gale created this Life Tributes page to make it easy to share your memories.

Stephen Leon Gale 71 passed away unexpectedly in his sleep on...

Send flowers to the Gale family.