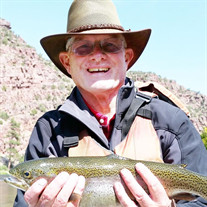 Stephen Dwight Bunnell passed away May 3rd at his home in Midway UT. Dwight passed peacefully surrounded by his family. Dwight is survived by his wife of 52 years, Deanna Ruth Dillon Bunnell and his children, Michele (Dale Duncan), Kristine (Mark Marshall), Stephen (Georgia Thompson), Kevin (Celia Anderson), Tamara (DJ Potter) and Matthew (Tamra Lusk) his mother, Donna Stubbs Bunnell and 24 grandchildren. Dwight was preceded in death by his father, Stephen Lewis Bunnell and by a granddaughter. Dwight was born on September 23, 1944; the second of four children born to Steve and Donna. Dad is the fifth Stephen in a line of eight Stephen Bunnells. Dad and his siblings, Glee, Jerry, and Janice enjoyed many happy hours on their farm on the corner of 8th South and 8th West in Orem, Utah. They also spent many hours, probably not quit as happy hours, working very hard helping grandpa run the family fruit farm. From an early age, dad was responsible for caring for and milking the family cow each morning beginning at 5:00 a.m. He also helped cultivate, plant, weed and sell produce from the family garden and irrigate, prune, spray, pick and peddle fruit grown in grandpa’s peach, pear, and apple orchards. When you asked him what he did in his growing up years, he always replied, rather crustily, “picked peaches.” Of the multitude of jobs dad helped with on the farm, picking peaches was his least favorite by far. The fuzz on the peaches aggravated his asthma, so picking peaches was a miserable assignment. However, miserable or not, according to him, he picked peaches. The chore dad probably enjoyed the most was peddling fruit with his dad and grandpa, Stephen Samuel Bunnell. Although they spent many tedious hours lumbering down the road in grandpa’s heavily-laden truck, dad enjoyed the hours he spent with his dad and grandpa and always fondly recalled “pedding stories” which are akin to “fish stories” they always started a 4:00 am, ended at midnight and the current trip in no way compared to those in the past. Dad attended Vineyard Elementary, Westmore Elementary, Lincoln Junior High, and graduated from Orem High in 1962. While Dad was in high school, he wrestled, ran track and served as senior class president. Following high school, the University of Utah on scholarship where he earned a BS degree in Zoology in 1968. While working on his bachelor’s degree, dad married Deanna Ruth Dillon in the Salt Lake Temple and they soon began their family. After finishing at the U, dad went to the University of Idaho where he earned a master’s degree in ecology studying pika. By the time dad finished graduate school and moved back to UT, Michele was 3 years old, Kristine was a year old and mom was pregnant with Stephen. At that time, dad had been accepted to Utah State University to complete a PhD. While working on the farm that summer, dad was hired by the Utah Fish and Game to be the Conservation Officer for Davis County and so did not pursue his doctorate. Thus, began his 32-year career with the Utah Fish and Game which later became the Division of Wildlife resources. Along the way Kevin, Tamara and Matthew joined the family brood, making an even half-dozen. He was a life-long, active member of The Church of Jesus Christ of Latter-Day Saints and served in many capacities. He served two years in the Southern California Mission and later, along with Deanna, as a service missionary at the Heber Valley Girl’s Camp. During his career, dad served in many capacities including regional biologist, Upland Game Coordinator, Chief of Game Management and various leadership positions in the Habitat Section. After retiring from the division, he worked for five more years for the Western Association of Fish and Wildlife Agencies developing the national sage grouse management plan. Dad’s career, especially the connections he made with people, along with his family, intellect, kindness and integrity were the things that defined him as a person. When not working, dad enjoyed reading, fishing, hunting and leading annual family road trips. These Griswald-esque excursions included such adventures as an emergency appendectomy, a broken windshield, coming home to a flooded basement, wildlife spotting competitions, finding pedidles and many flat tires. In 2003, after 25 years living in South Jordan, Mom and Dad built a home and moved to Midway where he had always wanted to live. Dad enjoyed an active and outdoor life despite a diagnosis of rheumatoid arthritis in his early 40’s. In 2007, dad’s life changed dramatically when he suffered two brain aneurysms. Thanks to more than a few of God’s mercies, he was able to enjoy a several more years of relatively good health. Ultimately, however, the effects of these aneurysms, coupled with his RA, led to many challenges for him in the end. Despite battling dementia and being confined to a wheelchair near the end, dad would still always welcome each visitor with a gleam in his eye and a warm smile. We love you daddy and we look forward to being with you again. In lieu of flowers, the family requests donations be made in memory of Dwight to The Wildlife Society (https://wildlife.org/donate/). Please specify Utah Chapter Scholarship Fund.

Stephen Dwight Bunnell passed away May 3rd at his home in Midway UT. Dwight passed peacefully surrounded by his family. Dwight is survived by his wife of 52 years, Deanna Ruth Dillon Bunnell and his children, Michele (Dale Duncan), Kristine... View Obituary & Service Information

The family of Stephen Dwight Bunnell created this Life Tributes page to make it easy to share your memories.

Stephen Dwight Bunnell passed away May 3rd at his home in Midway...

Send flowers to the Bunnell family.