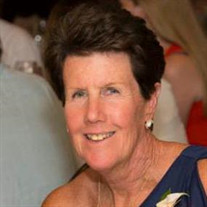 Our wonderful mother and wife, Sharon Casey Odell of Park City, UT passed away suddenly, unexpectedly and far too early at the age of 62 on October 21st, 2015. She was born on May 16th, 1953 in San Francisco, California to Donald and Ernestine Casey. During her childhood, she was a strong-willed older sister to her three younger brothers. She attended Stanford University where she met her husband, Timothy W. Odell in their freshman dormitory. While the details of who courted who remained controversial, they were eventually married June 15th, 1980 and had three children: Ian, Katie, and Erin. She is survived by her husband, three children, two grandchildren: Eleanor and Mercedes Odell, and three brothers: Michael, James, and Richard Casey. Sharon was an avid masters swimmer and coach for many years and enjoyed the camaraderie of her fellow swimmers in Park City and at the Steiner Aquatic center in Salt Lake City. Her swimming performance was hindered by a major stroke in 2012 followed by a difficult yet remarkable recovery. She continued to swim on a regular basis and fittingly was doing what she loved at the time of her death. A close second to swimming, Sharon’s second love was French language and culture. In college, she studied in France for a year and returned on vacations with her husband Tim, which were some of the highlights of her life. Finally, her passion for her children and animals was unparalleled. She raised three successful and well-balanced children; after they moved out of the house, she devoted more of her time to taking care of her dogs Daisy and Rosie as well as the animals at Petco at Kimball Junction. She also enjoyed her work on the Snyderville Basin Recreation Board in planning the trail system around Kimball Junction and the pool at Ecker Hill Middle School. Funeral mass will be held at 10:00am on Friday, October 30th at St. Mary’s of the Assumption Parish, 1505 White Pine Canyon Road, followed by a burial at Heber City Cemetery, 500 North 550 East. Reception follows at St. Mary’s.

Our wonderful mother and wife, Sharon Casey Odell of Park City, UT passed away suddenly, unexpectedly and far too early at the age of 62 on October 21st, 2015. She was born on May 16th, 1953 in San Francisco, California to Donald and Ernestine... View Obituary & Service Information

The family of Sharon Casey Odell created this Life Tributes page to make it easy to share your memories.

Send flowers to the Odell family.