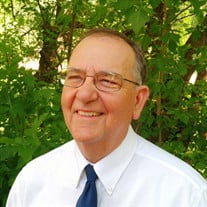 Scott Loertscher passed away on Wednesday, July 7, 2021, (69 years old) at his home in Midway surrounded by loving family members. Scott Rush Loertscher was born on May 25, 1952, in Heber City, Utah to Roy and Dorothy Loertscher as the 8th of 12 children. Scott grew up in Midway, Utah and learned to work hard with his family at various jobs including delivering newspapers. He worked all around the Heber Valley and graduated from Wasatch High School in 1970. He served a mission for the Church of Jesus Christ of Latter Day Saints from 1971 to 1973. He was called to the California North Mission (which included Reno, Nevada). Scott was married to Anne McDermaid on September 5, 1975 in the Manti Temple and they welcomed 5 children into the world while living in Heber before later moving the family to Midway. Scott built his own house in Midway, and years later built another. He enjoys building, tinkering, inventing, and fixing and taught his children the value of working hard. Scott worked for almost 40 years as a concrete truck driver or a concrete transportation and placement specialist as he liked to say. He loved his job with all the places he went and experiences he had. Scott enjoyed serving in the Church of Jesus Christ in various capacities, such as Executive Secretary and especially as a Primary Teacher for many years. He loved giving service and singing the hymns. He bore powerful testimony of his Savior, Jesus Christ. Scott is survived by his wife Anne, and their five children: Harmony (Dairus) Jensen, Tyrel (Michelle) Loertscher, Kira (Kristian) Geer, Cindel Hiort, Logan Loertscher, and grandchildren Dallon Jensen, Ellianna Jensen, Vaughn Loertscher, Emmaleesa Jensen, Ameya Loertscher, Aria Hiort, Dreyden Jensen, and Kenner Geer. He is also survived by his sisters Barbara Bonner, Melinda (Scotty) Deffendol, Jennie (David) Clawson, Brooke Pedersen, Melody (Scott) Hill, Rilla (Dave) Tischner, and his brothers Max (Ardean) Loertscher, Rush (Shana Lee) Loertscher, Kim (Sue) Loertscher, and sisters-in-law Violet Loertscher, and Carla Rae Loertscher. He is preceded in death by his father and mother Roy and Dorothy Loertscher, brothers Paul and Brian Loertscher, brother-in-law Rex Pedersen, and grandsons Leif and Erik Loertscher. The family would like to thank the medical professionals and hospice care for their help and support and the love of their wonderful family, ward, and community. A memorial service will be held on Tuesday, July 13, 2021 at 11:00 AM at the chapel located at 250 East 200 South, Midway, Utah. The service will also be broadcast via Zoom: https://us02web.zoom.us/j/81159817327?pwd=L25kQTducDVPREsyWExFRThhY1RLUT09 Meeting ID: 811 5981 7327 Passcode: 522841

Scott Loertscher passed away on Wednesday, July 7, 2021, (69 years old) at his home in Midway surrounded by loving family members. Scott Rush Loertscher was born on May 25, 1952, in Heber City, Utah to Roy and Dorothy Loertscher as the 8th... View Obituary & Service Information

The family of Scott Rush Loertscher created this Life Tributes page to make it easy to share your memories.

Send flowers to the Loetscher family.