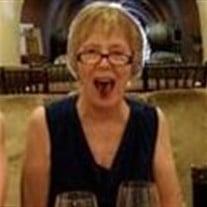 Born Elizabeth Haughie on July 15, 1938, Sam Wilkerson blazed through life. She left on Sunday, July 29, 2018 with fireworks, champagne and a solid "Yippee!" after celebrating the 7.5 year anniversary of being told she had only two months to live. The first of her family to attend college, Sam was an RN, had degrees in chemistry, physics, math, art, aeronautics, a Masters of Nursing as well as a PhD in Physiology and Biophysics (we might have forgotten some). Once she learned everything she wanted to know, she began to teach, culminating her career as Professor of Almost Everything in the nursing school at CSU Fresno. Sam loved adventure and travelled the world with her family and friends, rafting, diving, climbing, and generally raising hell. She will be remembered for her love of a good mystery, fine wine (none of that white crap), gardening, puzzles and good looking men, and for her total disdain for intolerance, bigotry, smoking, aspen trees and the damned rabbits under her porch. She would slaughter your name, could never remember a punch line, and had an odd propensity to put things in smaller containers. She opened her home to anyone, and they came. She was a divine hostess, an excellent friend, a beautiful soul. Sam was preceded in death by Jim, her beloved husband of 53 years, who is most assuredly no longer resting in peace. She is survived by her four children, nine grandchildren, and two great-granddaughters; who are already showing signs of the zest for life that she embodied. In lieu of flowers, Sam's family requests that you hug your children, weed your garden, donate blood, and if you like, make a donation to the Park City Library so they can buy more books about amazing women like Sam. (PC Library, Attn: Kate Mapp, P.O. Box 668, Park City, UT 84060)(Checks made to Friends of PC Library with Sam Wilkerson in the memo). She has promised to send signs from the great beyond. You'll know it's her by the light and the laughter.

Born Elizabeth Haughie on July 15, 1938, Sam Wilkerson blazed through life. She left on Sunday, July 29, 2018 with fireworks, champagne and a solid "Yippee!" after celebrating the 7.5 year anniversary of being told she had only two months to... View Obituary & Service Information

The family of Sam Wilkerson created this Life Tributes page to make it easy to share your memories.

Send flowers to the Wilkerson family.