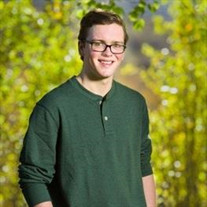 It is with tremendous sadness that we announce the passing of our son, Ryan James Mitchell. Ryan unexpectedly passed away at his home in Park City on Sunday March 12th. Ryan was 18 years old and a senior at Park City High School. Ryan was born on February 14th 1999 in Westlake, Ohio. He was a Valentines baby and an incredible gift of love to his parents Ester Elisabeth Mitchell and Cameron David Mitchell. He was older brother to Steven Bryce Mitchell, aged 16. Ryan was a gentle, kind and generous young man who knew how to put a smile on anyone’s face. Music, especially jazz, was both his passion and his center. Ryan played bass in many musical ensembles including the Park City High School Varsity Jazz ensemble and Chamber Orchestra. He also was the Principle bass player with Caleb Chapman’s Time Check Jazz Orchestra. In previous years he was the bass player for Caleb’s Voodoo Orchestra and The Inevitables, with whom he toured the British Isles last summer. He was scheduled to tour Germany and Austria with Caleb’s Crescent Super Band this summer. Ryan was planning to attend Berklee College of Music in Boston this fall. Ryan started his scholastic career at Lake Ridge Academy in Ohio and transferred to Park City High School when his family moved to Park City in August of 2013. He was thrilled to be living in Park City. He was an avid skier. He loved skiing powder in the trees and exploring in the mountains. He also loved sailing, and with his family, would go on extended sailing trips in the Caribbean. As a young sailor, Ryan was active in a racing program and learned how to handle a 50-foot sailboat even before getting behind the wheel of a car. He also was a certified scuba diver and especially loved doing night dives. Ryan brought joy to our lives and those he touched. A Celebration of Life service is being held on: Sunday, March 19, 2017 at The Eccles Theater, 1750 Kearns Blvd, Park City, from 2:00 pm – 5:00 pm. In lieu of flowers, a memorial scholarship, The Ryan Mitchell Memorial Music Scholarship, is being established to his honor his memory and his love of music. Please send donations to: The Park City High School Community Scholarship Program. 1750 Kearns Blvd. Park City Utah, 84060

It is with tremendous sadness that we announce the passing of our son, Ryan James Mitchell. Ryan unexpectedly passed away at his home in Park City on Sunday March 12th. Ryan was 18 years old and a senior at Park City High School. Ryan was... View Obituary & Service Information

The family of Ryan Mitchell created this Life Tributes page to make it easy to share your memories.

It is with tremendous sadness that we announce the passing of...

Send flowers to the Mitchell family.