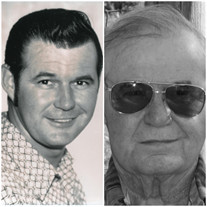 Russell Don Taylor, 73 started his new journey on Sept, 8th 2015, a true fighter to the end. He was born in Salt Lake City, Utah on May 25, 1942 to Wyma Cobbley Taylor Moncur and Ivan Don Taylor. He was a devoted husband married to his best friend Nancy Ann Rasband for over 51 years. He loved life and lived passionately. There was nothing he loved more than the time he spent with family. He was proud of his 4 kids, of their accomplishments and the amazing parents they became. He loved his 14 grandchildren, 10 great-grandchildren, a great-great granddaughter, and all those that he adopted into his family around the campfire. Russ believed that the hunting season should have been a paid holiday, doing what ever he could to get us all together in the mountains. He had the ability to build, fix and repair anything that needed doing. He was fulfilled when he could pass down his knowledge of the great outdoors or many of his others skills with those he loved. He had sense of humor, a quick wit, was delighted when he could torment his mother-in-law, solved all the world problems with his adored father-in-law, cherished fishing and telling the fish tales. There was not a bigger John Wayne fan or a better breakfast cook. He gave when he could sometimes more than he had. This remarkable man will be remembered and missed by everyone that knew him. We want to thank our Mom, Nancy, for her devoted love, affection, and continuous care of our Dad. Thanks Mom! Survived by his children: Wendy (Les) Robins, Robert (Claudia) Taylor, Shaun (Amber) Taylor, Travis (Heather) Taylor; his brothers, sisters and in-laws; Doug (Judy) Moncur, Ranell Moncur, Judy (Delroy) Leman, Burt (Debbie) Taylor, Scott (Dee Dee) Taylor, Lucy Greer, Penny Lee (Bob) Dudley, Annette Martinez, Penny (Mark) Morgan, Charles (Earlene) Rasband, Fred (Faith) Rasband, Alan (Jill) Rasband. Preceded in death by his parents and in-laws: Wyma Cobbley Taylor Moncur, Ivan Don Taylor, Lee Moncur, Fred Thomas Rasband and Marvin R Todd; his brother, sisters and in-laws; Florance L. Sandquist, Brian Rasband, Mary Dawn Wilkerson, Lee Greer. Graveside services with be held at the Heber City Cemetery located at 680 N 550 E on September 19th 2015 at 12:00 pm followed by a Celebration of his Life Luncheon at 2945 South 1800 East Heber City.

Russell Don Taylor, 73 started his new journey on Sept, 8th 2015, a true fighter to the end. He was born in Salt Lake City, Utah on May 25, 1942 to Wyma Cobbley Taylor Moncur and Ivan Don Taylor. He was a devoted husband married to his best... View Obituary & Service Information

The family of Russell Don Taylor created this Life Tributes page to make it easy to share your memories.

Send flowers to the Taylor family.