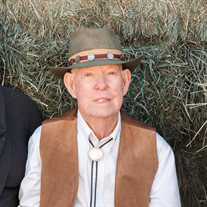 Colonel Ronald Boyd France PhD. peacefully passed away in the Utah Valley Hospital November 14th, 2019 at 9:00 pm. Survived by his wife Margo Gene Strasser France, the love of his life, his daughters Heather Anne France and Margaret Elise Culley, his son in-law Lawrence Matthew Culley and foster son Frederick Sakizzie. Predeceased by his son Andrew John France. Ron was the most amazing, loving, generous, brilliant, hardworking, hilarious, husband, father, grandfather, uncle, friend, officer and counselor anyone could imagine. Truly a gentleman and a gentle man, he was slow to anger and quick to love. Witty, comical and intelligent, with his sense of humor and telling jokes, he made people laugh until his very last day. November 28, 1930, during The Great Depression, Ron was born into deplorable conditions. Both his parents were alcoholics, neglectful, abusive and struggled to meet their most basic needs. Most people would be defeated by such conditions, but Ron used this as the foundation for survival, strength and innovation to create a better life for himself. From the age of seven, he began selling newspapers and has worked ever since. Through his efforts, he has not only improved his situation, but has lifted all those around him. At age eight Ron chose to get baptized into the Church of Jesus Christ of Latter-Day Saints. Having no family to support him, he walked alone to and from the Tabernacle to be baptized. He often talked about how strong the Spirit was with him that day. Struggling with regular schooling and the lack of support from home, Ron joined the Navy at age 17. He rose through the ranks quickly. He used his higher rank and resourcefulness to run a payday loan service. With this income, he was able to care for his parents and buy them a home. They couldn't feed him as a child, but he bought them a house as a teenager! Ron's care and generosity continued until their early deaths. Ron's education in the Navy as a meteorologist, gave him the confidence to attend university, so at age 23 he left the Navy and attended the University of Utah studying Psychology. He was the 75th psychologist licensed in the state of Utah, and then began his career as a Vocational Counselor with State Vocational Rehabilitation. He joined the Air Force, began working towards his PhD. Ron reached the rank of Colonel in the Air Force Reserves. He worked for many years and retired from the Veterans Administration Hospital. He had a private practice with Biofeedback and Pain Management, worked at the Indian Alcohol and Drug Rehab Center, the State Mental Hospital, the State Prison, Pioneer Youth and Adult Community Services, Behavioral Health Associates of Utah and more. It seemed he would retire from one job and get two more. He worked tirelessly to help humanity, infinitely changing our world for the better. Ron served in the military for 35 1/2 years. Ron served in the Korean War as a meteorologist in the Navy and the Vietnam War as the commander of Medical Evacuation Squadron in the Air Force. As dedicated as Ron was to his work, he was even more devoted to his family. He married Margo Gene Strasser September 15th, 1958 and had a long, marriage of 61 years with only "five major arguments". As a family we would have memorable times together enjoying the outdoors. We would go rafting, hiking and camping often with extended family and friends. He loved his nieces and nephews and tried to include them in his life as much as possible. Ron’s patience and unconditional love was unrelenting when it came to his children. He never gave up on his troubled son Drew, continuing to believe in his potential turnaround until his early passing. Ron took two adventurous trips to Salvador, Brazil to visit his daughter Heather. Ron and Heather shared a bond that surpassed borders, religion and political views. Because of his love and support, Margaret was able to follow her dreams of starting Northfield Stables - a horse boarding facility. We love and miss him dearly. After raising their children and semi-retiring , Ron and Margo had many adventures traveling and seeing the world with their close friends Dave and Barbara Evans. Dave would plan everything out, and Ron would be the tour guide, researching and explaining the particulars of each place, including the Guten Tags and hola, que tals! His final years were spent surrounded by laughter and adventures of his young grandsons Jack and Matthew Culley. He spent as much time as possible with them. Without him, their adoptions would not have even been possible. Their last happy memories together were spent at Disneyland in September 2019! The boys love their grandpa so much! The love and support he gave his wife, children and grandchildren is insurmountable. The gratitude we have for him will be carried on as we continue to live out and fulfill his lessons and dreams... One of Ron’s cherished memories was going on the Utah Honor flight in May 2019. Ron was a proud American and loved his veterans hat from the trip. He wore many other hats as well: Navy Dixie Cup, Air Force Flight Cap, Latter-Day Saint, Cowboy Hat, Psychologist, Husband, Father, Grandfather, Uncle and Friend. He was truly an Officer and a Gentleman. He will be deeply missed by all those who knew him. His last words to his loving wife were "I love you more than you will ever know. It's been a great ride.”

The family of Ronald Boyd France created this Life Tributes page to make it easy to share your memories.

Colonel Ronald Boyd France PhD. peacefully passed away in the...

Send flowers to the France family.