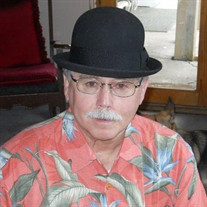 Robert Dean “Spike” Thomas, beloved grand-dad, dad, uncle, brother and friend peacefully passed away February 14, 2017. Spike was born in Salt Lake City, Utah on December 21, 1948 to Theodore Dean and Shirely Oakeson. He was the first of their six children. Spike lived a full life with many adventures and accomplishments. As a Boy Scout he attended the 1964 National Jamboree in Valley Forge, PA. While serving in Guatemala, he was one of the first missionaries to learn the K’iche’ Mayan language. As a young adult he loved to ski in the backcountry, rappel and to go exploring. Later in life Spike found joy in serving in the Wasatch County Search and Rescue, and volunteering for the Utah State Defense Force. Spike followed the footsteps of his father by choosing a career as a union carpenter. As a carpenter, he worked on numerous large-scale projects in the western United States, such as the building of the Huntsman Center, the Excalibur Hotel and the Mt. Timpanogos Temple. Spike married the love of his life, Sandra Castillo, in the Oakland Temple in June of 1971. Together they shared many wonderful experiences and love for each other. Spike is survived by his beloved wife, Sandra; children Xela Thomas, and Nate Thomas (Melanie); grandchildren Christian Clegg, Reagan Thomas, Rachel Thomas, Jennifer Thomas, Heather Thomas, Matthew “Tell” Thomas and Theodore Dean Thomas. He was preceded in death by his father, and by his son Joshua Carlos Thomas. In lieu of flowers, please make a donation to the Humanitarian or Missionary Fund of The Church of Jesus Christ of Latter-day Saints or a charity of your choice. The family wishes to express their deep gratitude to the Thomas family, the residents of Midway and especially the Midway Second Ward. There will be a viewing held on Tuesday, February 21st from 9:30-10:30 a.m. at the LDS Meetinghouse located at 1102 South Center Street, Midway, Utah. Funeral services will begin at 11:00 a.m. on the same day and location. Condolences may be shared online at www.probstfamilyfunerals.com

The family of Robert Dean "Spike" Thomas created this Life Tributes page to make it easy to share your memories.