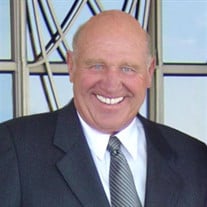 Robert Schear Remund, (74) passed away on September 21, 2017 surrounded by his family in Midway, Utah after a courageous 4 year battle with cancer. He was born on March 4, 1943 in Heber City Utah to George and Cynthia Remund and raised on a dairy farm in Midway, Utah. He graduated from Wasatch High School where he lettered in football and track. He also was president of the Future Farmers of America. He was active in scouting with his father and earned the rank of Eagle Scout. Bob joined the 116th Engineer Battalion in the National Guard from 1960-1968. He served one year active duty in Fort Lewis, Washington. After serving, he returned home and married his high school sweetheart, Joan Edwards, in the Manti Temple on January 10, 1963. Bob graduated from Utah Technical College with a degree in Electrical Technology and Heating and Air Conditioning. He then went on to work at Brigham Young University for 40 years retiring as the General Manager over Auxiliary Maintenance. Bob and Joan are the parents of 5 children: Ross, Teressa (Rick) Miller; Lynn (Lisa) Remund, Kent (Janie) Remund, and Amy (Dave) Horlacher. He enjoyed spending time with his family. His interests included - grandchildren and great-grandchildren, boating, camping at Bear Lake, traveling, snow and water skiing, electronics, driving bus, fixing everything and anything and was a genius innovator. Bob loved the youth and was a mentor to them in various capacities throughout his entire life. Bob served as bishop in two different wards for the Church of Jesus Christ of Latter-Day Saints. To many he was known as Bishop Bob. November 2, 2003 his sweetheart, Joan, passed away from cancer. Bob was blessed to later marry Vickie Edwards Taylor in the Provo Temple on September 10, 2005 and spent 12 wonderful years together. They served 3 missions for the LDS church and enjoyed traveling and doing humanitarian service. He came to love the Polynesian people and culture during their missionary service at the Polynesian Cultural Center in Laie Hawaii. They blended 11 children, 38 grandchildren, and 9 great grandchildren whom they loved supporting in all their activities. Bob was an instant friend to anyone he met and greeted them with an amazing smile. If you have been blessed to experience the Friendship of Bob Remund, you have witnessed the pure love of Christ. He was preceded in death by his Parents, Barbara (sister), wife Joan and infant son Ross He is survived by his wife Vickie and children: Teressa (Rick) Miller, Lynn (Lisa Shields) Remund, Kent (Janie Long) Remund, Amy (Dave) Horlacher: Johnny and Bud (brothers) and his sister Cindy. The family of Bob Remund would like to acknowledge and give thanks to Dr. William Lowrance and Dr. Sumati Gupta and their amazing teams for all of the medical help, and the personal love and concern that they have given to Bob and his family during this four year journey. We also wish to thank IHC Hospice, and Lisa Nelson RN, who gave final care and love. Funeral services will be held at 11:00 a.m. on Tuesday, September 26, 2017 at the Memorial Hills LDS Chapel (250 E. 200 S., Midway, Utah). There will be a viewing on Monday, September 25th from 6-8 p.m. and prior to the services from 9-10:30 a.m. both at the chapel. Interment will be in the Midway City Cemetery.

Robert Schear Remund, (74) passed away on September 21, 2017 surrounded by his family in Midway, Utah after a courageous 4 year battle with cancer. He was born on March 4, 1943 in Heber City Utah to George and Cynthia Remund and raised on... View Obituary & Service Information

The family of Robert Schear Remund created this Life Tributes page to make it easy to share your memories.

Send flowers to the Remund family.