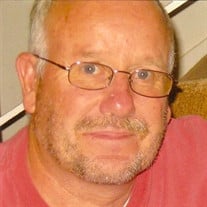 Ollie Robert B. Clyde orbited into earth on December 16, 1955, born to Calvin M. and Margie B. Clyde. After seven and a half years of laughing and joking, complete faith, prayers, and love, he decided to be the bigger man and graciously bow out of the fight with cancer on October 18, 2019. He fought that fight with his beloved wife Carolyn Carlile Clyde, and his children Brooke and Beto, Shawn and Lindsay, Austin, Shea, and Larissa, by his side. The man who is larger than life, bigger than this world, and beyond this galaxy has left a hole—but it’s filled with beautiful memories of a man who knew what it was to truly live. Ollie was born and raised in Heber City, Utah, the oldest of seven children born to Cal and Margie. He was the best, kindest, and most giving brother that Daff, Lois, Willis, Alex, Becky, and Jean could have had. He grew up riding horses, hunting with his dad and brothers, teasing, serving, and setting an example of a strong work ethic. He had a love of life and people. He was a true friend who loved and served everyone who he came into contact with. Ollie graduated from Wasatch High School in 1974 and went on to work at very difficult blue-collar jobs so he could share the money with those who needed it. The job he loved most was being a hay farmer. He was sealed in the LDS Salt Lake Temple to Susan Olson Clyde in 1981. Together they raised two beautiful, intelligent daughters, Brooke and Lindsay, who he taught to ride horses, raise pigs, and work hard. The best times they shared were deer hunting in the mountains, camping in Mill B, and traveling all over the state for high school rodeo weekends. He loved his girls more than life. He was a devout member of the LDS Church and thought he was a member of the Mormon Tabernacle Choir. He loved to change the words to the hymns during sacrament meetings, giving those who sat by him first, mortification, and then stifled and irreverent laughter. He reconnected with his old friend, Carolyn Carlile, and they began their life together in 2007. They were sealed in the LDS Provo Temple in 2008. Ollie gained three more kids—Austin, Shea, and Larissa—who he loved as his own. Ollie and Carolyn had a marriage of laughter and love, and adventures and fun. Carolyn managed to get him on a cruise ship more than once, and one of his favorite trips they took together was to the Calgary Stampede. His life was complete with the arrival of his grandchildren, Lily, Hannahlia, Aislin, and Arrio, who were the stars of his life that outshone almost everyone else. Grandpa was his favorite calling. To his grandchildren, always remember, Grandpa will miss you, but he is watching over you always. His softest spot was for animals, horses and dogs in particular, and we know he’s overjoyed to be welcomed home by Duke, Spike, DollyAnna, Dollie and Ann, OJ, Wolf, and most especially Jo. There are a number of horses rearing for him to ride them, and Brooke and Lindsay hope he gives Jet Quick Joe, Bear, and K-Ebony a big hug for them. Heaven will be more entertaining now. Ollie is preceded in death by his father, Calvin, and his mother, Margie. He is survived by the love of his life, Carolyn, daughters Brooke (Beto Navarrete) Clyde-Balbuena, Lindsay (Shawn) Flanagan, Austin, Shea, and Larissa Scott, and his four jewels, Hannahlia and Arrio Clyde-Balbuena and Lily and Aislin Flanagan. He is also survived by his six loving and grateful siblings, Daff (Jana) Clyde, Lois (Jeff) Ivers, Willis (Lynette) Clyde, Alex (Angie) Clyde, Becky Clyde, and Jeanie (Rich) Brierley. The family would like to thank the doctors, nurses, and staff at the Huntsman Cancer Institute, especially to Mary Steinbach, DNP, Dr. Adam L. Cohen, and Dr. Djordje Atanackovic, for their incredible efforts in keeping him with us and giving us seven and a half more years. They would also like to thank Applegate Hospice for their compassionate care of him. In lieu of flowers, please donate to the Horse of Many Colors Cancer Foundation. Donations can be made at Utah Community Credit Union. We will be celebrating his life with family and friends at a viewing on Tuesday, October 22nd, from 6:00 to 8:00 PM at the Heber Valley Funeral Home, 288 North Main Street, Heber, Utah and on Wednesday, October 23rd, from 9:30 to 11:30 AM at the Daniel Ward LDS Church, 2285 South Daniel Road, Daniel, Utah. Funeral services will be held at the Daniel Ward LDS Church at noon with burial at the Heber City Cemetery to follow.

Ollie Robert B. Clyde orbited into earth on December 16, 1955, born to Calvin M. and Margie B. Clyde. After seven and a half years of laughing and joking, complete faith, prayers, and love, he decided to be the bigger man and graciously bow... View Obituary & Service Information

The family of Robert (Ollie) B Clyde created this Life Tributes page to make it easy to share your memories.