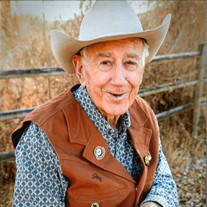 Born May 22, 1930, in Heber City, Utah, to Leslie ‘Les’ McPhie & Marvel Maud Epperson McPhie. Passed peacefully on October 18, 2021, to be reunited with his loving wife Mitzie and children, Bart, Kristine Marie, and Wendy Sue. Bob was born and raised in the Heber Valley, he graduated Wasatch High School Class of 1948, lettering in both, basketball, and football. He spent his younger days working sheep for Jordan Livestock, as well as working the New Park-Park City Mines. He attended BYU majoring in animal sciences. Bob joined the United States Navy in 1950, serving until 1955. While he was stationed in Long Beach California, he met ‘the love of his life,’ the beautiful Mitzie Kaser. Their first date was to a Horse Sale, at the Los Angeles Stockyards, he was quite the romantic. They dated for three months, before his discharge from the Navy. Upon his discharged, he returned to Heber. Bob called Mitzie many times, he then sent her an engagement ring through the mail, she agreed to be married, his ‘Mail Order Bride.’ They were married on September 1st, 1955, in Bell, California and later sealed in the Salt Lake Temple. Upon their marriage, he resumed his prior job with Jordan Livestock, he then returned to the mines. At this point, he decided he needed an education. Bob worked nights and attended BYU during the days. Mitzie helped by attending his classes and taking notes for him. While attending BYU, one of his professors, offered him the position of manager at the Roper Stockyards, in South Salt Lake. This was where his interest in the livestock industry began. Bob worked for Bayer Agricultural Division, as a regional sales representative, for 33 years. He visited large feedlots and large animal vets, in UT, SD, MT, NV, OR and WA. He was very active in the Utah Cattlemen’s Association. Bob was President of the International Feedlot Ropers Association, and the winner of their World Champion Team Roping Event, in 1982, with his incredible horse, Keno. Bob was very active with the Mountain Valley Stampede Rodeo, serving as chairman for many years. Bob and Mitzie played in the original M&M Band, entertaining many at parties and parades. Bob had an amazing singing voice and was often asked to sing at funerals. They were honored to serve as the Grand Marshals of the Wasatch County Fair in 2017. An active member of The Church of Jesus Christ of Latter-Day Saints, he served in many capacities including bishop, and as a Temple worker for 14 years. Bob and Mitzie served 2 missions to Nauvoo, IL, where he served as the wagon master. Bob and Mitzie were blessed with 5 children, Robert L. (Angela), Bret L. (Tammie), Bart, Kristine Marie, and Wendy Sue, nine grandchildren and 24 great-grandchildren. He was preceded in death, by his loving wife Mitzie, son Bart, and daughters Kristine Marie and Wendy Sue. Services to be held at the Heber East Stake Center located at 2395 So. Mill Road, Heber City, Utah 84032 Friday, October 22, 2021: Viewing 6:00pm to 8:00pm Saturday, October 23, 2021: Viewing 11:30am to 12:30pm Funeral 1:00pm, with interment immediately following, via horse-drawn carriage, at Heber Valley Cemetery To view the services live, please visit: https://my.gather.app/remember/bob-mcphie

The family of Robert "Bob" McPhie created this Life Tributes page to make it easy to share your memories.

Send flowers to the McPhie family.