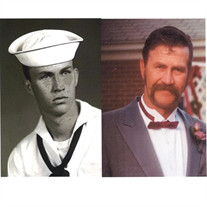 Robert (Bob) John Rasband, loving father, grandfather, son, and brother, passed away peacefully in his sleep with his daughter by his side, on Wednesday, December 9, 2020. Dad suffered from many health issues, some terminal, and his body finally became worn out. Dad was born June 30, 1942 in Heber, Utah to John (Jack) Curtis Rasband and Margaret Eloise Clyde, the oldest of three children. He attended and graduated from Wasatch High School in 1960 and had just barely celebrated his 60th school reunion this past summer. Right after high school, dad joined the Navy. He was an Aircraft Structural Mechanic 3rd Class and worked on the F-4 Phantom. He was in the Navy from 1960-1964 and was assigned to Fighter Squadron 96 aboard the USS Ranger. We are so proud of our dad and his service to our country in the Vietnam War. Dad was a cowboy through and through and was raised by hard-working parents who instilled those same values in him. He had a way with horses, and we spent our entire childhood surrounded by at least four horses on our property. We were introduced to riding horses long before we were introduced to riding bikes. There were so many lessons taught by our dad and because of these lessons, we became the driven, hard-working, dedicated individuals he wanted us to be. We learned to drop crayfish traps in Strawberry Reservoir first thing each morning on the hunt “just in case you don’t shoot anything, and you will still have something for dinner.” Dad loved taking every one of his kids and grandkids fishing. Going to rodeos when Dad was riding was fun because you got to play with the clowns. There definitely is a right way and a wrong way to irrigate a pasture. Saddles are optional but preferred. You can make coffee on the stove with a pot of water and a clean sock for the grounds. “Home is where you hang your hat.” Men were never meant to ride bikes in cowboy boots and hats. This was witnessed once, and once was enough. Always keep a toothpick in the brim of your hat. And last, but certainly not least, we learned that a real man can braid his daughter’s hair as well as style her hair for dance recitals. Dad loved John Wayne movies (any cowboy movies really), Chris Ledoux, Merle Haggard, George Jones, and Johnny Cash music. He loved his coffee, Raisin Bran cereal, and English muffins. He had a deep, wonderful, belly laugh and loved to pull funny faces. Our dad may have been stubborn and a headstrong cowboy, but he had a soft spot for his children and grandchildren. He loved us all fiercely. Dad is survived by two sons, one daughter and three stepsons, John (Melinda) Rasband, Shane (Stephanie) Rasband, Tiffany (Jarod) Tuck, Gene (Lori) Bills, Jason (Ashley) Bills, and Rocky (Heidi) Bills. He is survived by sixteen grandchildren, Dakota, Noah, Hayden, Jonah, Logan, Wyatt, Everett, Ashton, Kelsey, Alex, Garrett, Gabby, Haley, Lincoln, Christian, and Carter. Dad is also survived by his one sister, Lynne Rasband (June Christiansen), and one brother, Clyde (Cheryl) Rasband. He was preceded in death by his parents, grandparents, and many other relatives who have gone before him. Friends may visit with family on Thursday, December 17th from 10:00-10:45 a.m. at Heber Valley Funeral Home, 288 N. Main St., Heber City, UT. Graveside services with military honors will follow at Heber City Cemetery, 680 N. 550 E., Heber City, UT. Graveside services will also be broadcast via Zoom (meeting code: 4356545458). “Courage is being scared to death…and saddling up anyway.” ~John Wayne Dad, we know you have saddled up and are now riding towards the heavenly sunset. Until we meet again. We love you so much.

Robert (Bob) John Rasband, loving father, grandfather, son, and brother, passed away peacefully in his sleep with his daughter by his side, on Wednesday, December 9, 2020. Dad suffered from many health issues, some terminal, and his body finally... View Obituary & Service Information

The family of Robert 'Bob' John Rasband created this Life Tributes page to make it easy to share your memories.

Send flowers to the Rasband family.