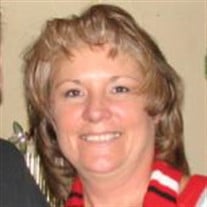 Robbin Christine Zimmerman, beloved wife, mother, grandmother, sister and friend, passed away at her home on May 21, 2016, in Heber City, Utah, surrounded by her family after fighting a courageous battle with lung cancer. Robbin was born on December 24, 1959 to Billie Hastings and Ralph Helms. She was one of six children. Her life as a child and young adult was in the City of Dinuba located in the San Joaquin Valley of California. Robbin attended school in Dinuba and graduated from Dinuba High in 1978. Early on she married Robert Woodcock and had three children Hidy, Anthony and Adam, they later divorced. She met her loving husband Richard Zimmerman in Island Park Idaho whom she married on January 25, 1998, and welcomed his son David into her family. She became the proud grandmother to seven beautiful grandchildren – Mathew, Zackary, Jordon, Charlotte, Ryan, and Allison. Robbins main career was as Housekeeping and Assistant General Manager for Island Park Village Resort. While living in Island Park Idaho where she was very well known for her constant help to everyone that asked, she spent many years as a volunteer EMT with Fremont County as well as performing many other volunteer duties throughout the community. In 2006 she and her husband moved to Maui Hawaii where she became a hairdresser. They eventually moved back to the mainland in 2010 and lived a short time in southern California, then back to the mountains in Heber City Utah. Robbin worked very hard over the years through her dedicated work as a manager, volunteer, and Mother. She would never complain about what she was doing or about the road ahead. Robbin loved fishing, golf, the great outdoors, being with family and friends and helping whoever and wherever she could. Robbin is survived by her husband Richard; children Hidy (Ashley) Rasmussen, Chubback, ID; Anthony (Emily) Woodcock, St Anthony, ID; Adam (Brittney) Woodcock, St Anthony, ID; David (Christina) Zimmerman, Gulf Breeze, FL; brothers and sisters; Lora (Sammy) Febres, Dinuba, CA; Deborah (Don) Chancellor, St. Anthony, ID; Sandra Howell, Dinuba, CA; Jim Samples, Northern California, Larry Samples, Austin, TX and six grandchildren; preceded in death by father Ralph Helms, mother Billie Samples and Brother Ken (Lisa) Black, Bishop, CA. A Celebration of Life Ceremony will be held in Island Park, Idaho at the EMS Building on Library Rd on June 18, 2016 at 12:00 noon to 3:00pm. There will be a second Celebration of Life held in Dinuba, California in the weeks to follow. Robbin requested contributions be made in her name to the Huntsman Cancer Institute which can be done online at Huntsmancancerinstitute.org/giving. For further information on the Celebration of Life Ceremony please send an email to [email protected]

Robbin Christine Zimmerman, beloved wife, mother, grandmother, sister and friend, passed away at her home on May 21, 2016, in Heber City, Utah, surrounded by her family after fighting a courageous battle with lung cancer. Robbin was born on... View Obituary & Service Information

The family of Robbin Christine Zimmerman created this Life Tributes page to make it easy to share your memories.

Send flowers to the Zimmerman family.