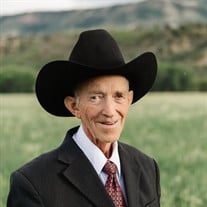 Richard Roland Turnbow, aged 74, passed away early in the morning at his home on Friday, September 3, 2021 in Hanna, Utah. He was born on April 15th, 1947 in Salt Lake City, Utah to goodly parents, Burnell and Jennette (Davidson) Turnbow. He married Suzanne Marie Hill on July 31st, 1971, in the Los Angeles Temple, surrounded by family and friends. 50 years later, he and Suzanne were blessed to celebrate their 50th wedding anniversary shortly before his death. Richard always loved to work and be productive, and it showed in everything he did—his professional life, his family life, and in the hobbies he enjoyed. Some of his favorite things to do included training and riding many horses over the years, riding into the Uintas with his family for camping and fishing trips, gardening, and hunting with his children. He loved to play basketball with his family as well as at the ward building. Perhaps his most beloved activity was farming, which he pursued all throughout his life. In April of 1971, Richard graduated from Brigham Young University in Accounting. He had a varied and impressive career: Touch Ross & Company in San Diego, CA and Salt Lake City, UT; The Naturalist (based out of Provo, UT); the Controller of Hotel Utah during its transition to the Joseph Smith Memorial Building, and the CFO for Tower Management Company managing Stein Eriksen Lodge hotels. He later became the CFO of RC Willey, working there for nearly a decade before moving onto PMJ Companies, heading up the demolition of the Bennett Paint Building for subsequent development. He worked as an accountant/property manager at PDT management before finishing his professional career as a commercial real estate agent. After retiring, Richard spent the majority of his time doing what he loved: farming. He is preceded in death by his parents, Burnell and Jennette, and his brother, Reed Turnbow. Of his siblings, he is survived by two brothers, Merrill and Parley, and two sisters, Carol Stallings and Joy Burgoyne. His memories live on in the lives of his wife, Suzanne, and their nine children: Rich (Kimberly), Lani (Sherdon), Michelle (Seth), Nathan (Carol Lynn), April (Paul), Glen (Darby), Bryce (Camilla), Ruth (Joseph), and Rachel (Mitchell). He and Suzanne have 46 grandchildren. Funeral services will be held on Saturday, September 11th, 2021 at the Tabiona Ward (3750 N 37900 W, Tabiona, UT 84072) with a viewing from 10:00 AM to 11:30 AM, and the funeral service at 12:00 PM. Internment at the family cemetery in Hanna, UT. Join service live by the following link: https://my.gather.app/remember/richard-turnbow

Richard Roland Turnbow, aged 74, passed away early in the morning at his home on Friday, September 3, 2021 in Hanna, Utah. He was born on April 15th, 1947 in Salt Lake City, Utah to goodly parents, Burnell and Jennette (Davidson) Turnbow. He... View Obituary & Service Information

The family of Richard Roland Turnbow created this Life Tributes page to make it easy to share your memories.

Richard Roland Turnbow, aged 74, passed away early in the morning...

Send flowers to the Turnbow family.