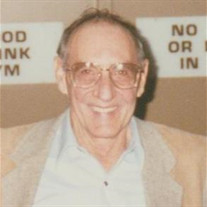 Rex B, Sabey, 83, passed away at home in Charleston UT, on a rainy morn, September 15, 2017, following a battle with colon cancer. He was born August 5, 1934 in Wallsburg Ut, the son of Ellis Berdell and Vivian Lamb Sabey. In 1939, the family was joined by two beautiful twin girls, Connie and Colleen. Rex was the perfect big brother, who adored them, but teased them incessantly. He also had a foster sister Mae Seamons. The family lived in several different locations after leaving the burg. They eventually settled in Charleston. After finishing Wasatch High School with the class of 1952, he worked at hill Field, then joined the Army in 1953 and spent 16 months in Japan and Korea. After his discharge in 1955 he worked on construction jobs as a heavy equipment operator. On September 29,1956, he married Peggy Ann (Peg) Allred of Charleston in Elko Nevada. They were sealed in the Salt Lake LDS temple on June 18,1963. They made their first home in Orem, Utah, but moved to several different places as he followed the construction field, eventually building their home in Charleston in 1970. He was employed locally by several companies in the Provo/Orem area, but also enjoyed working in Blanding, Kanab, the Grand Mesa in Colorado, Manila and Flaming Gorge area. He was also employed in the Lark and Park City mines. Although he had many severe accidents and surgeries throughout his life, he always put his family’s needs first. He earned the reputation of being a dependable, very hard worker. He Never lost his sense of humor, in spite of the many challenges he faced throughout his life. Rex and Peg were blessed with six wonderful children; Phil R. and Brett B. Sabey, Whitney Ferguson, (Greg), Tracey An Memmott, Clark James and Jed E Sabey. They have 19 Grandchildren and 17 Great Grandchildren. Rex was preceded in death by his son, Phil R. Sabey, his Parents, sister and brother in law, Colleen and Ned Jones, father and mother in law, Rex E, and Ruby C. Allred, sister and brother in law, Beth Allred and Harold Kinsey. Also, Nephews, Randy Jones, Mitch Davidson, and foster sister Mae Seamons. Rex is survived by his loving wife, Peg, their five children and grandchildren, sister Connie Ross and son in law Greg Ferguson. Funeral Services will be held in the Charleston Ward Chapel on Wednesday the 20th at 11:00 AM. A viewing will be held on the 19th from 6:00 PM to 8:00 PM, and before the funeral from 9:30 to 10:30 AM at the Charleston Chapel. The Sabey Family wishes to acknowledge and thank the many people who have reached out to them this past year. We are forever grateful for all the kind words and deeds, prayers, cards, visits, meals and treats. Heartfelt thanks to the Encompass Hospice folks; Daylene, Amber and Matt, Hospice Dr. Allen, also Dr. Greg Tayler Primary care physician and wife Genny, special friends.

Rex B, Sabey, 83, passed away at home in Charleston UT, on a rainy morn, September 15, 2017, following a battle with colon cancer. He was born August 5, 1934 in Wallsburg Ut, the son of Ellis Berdell and Vivian Lamb Sabey. In 1939, the family... View Obituary & Service Information

The family of Rex B. Sabey created this Life Tributes page to make it easy to share your memories.