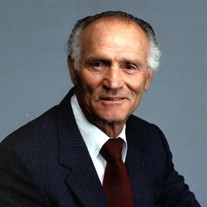 Reed Ford, age 93, was born on August 11, 1922, in Wallsburg, Utah to Alfred Ford Jr. and Molinda Boren. He passed away Christmas Eve peacefully in his home surrounded by his family. Reed was raised in Wallsburg, which was a place he held close to his heart throughout his life. He grew up on the farm. He graduated from Wasatch High School, attended BYU, and then joined the Armed Forces. Reed enlisted into the Airforce during World War II, earned his Captain Wings, and piloted the B-17 bomber. When he returned from the war, he married his sweetheart, Velma Mecham, and thus began an eternal companionship of 72 years. They were married in Cedar City, UT, on April 22, 1946 and later that year solemnized the marriage in the Salt Lake Temple on December 19, 1946. After the war, Reed worked with his father and brother to build a farm and dairy business. Later, he began working for the Wasatch School District and stayed there until his retirement at age 65. Even then, he continued his farming and ranching. His knowledge of agriculture and mechanics was unsurpassed. Reed loved God, his family, and Wallsburg – in that order. You could find him on the farm, at the church, or with his family; but always in Wallsburg. He lived a Christ-like life and was a people-person, loving his friends and neighbors. Reed actively served in the LDS church as a Ward Clerk for 9 years, Bishop for 16 years, and as a High Councilman for 8 years. He was then called as Heber City Utah Stake President and served for ten years. He continued serving in the church throughout his life. His first calling was Scout Master. He loved spending time with the youth. He earned his Eagle Scout and was awarded the Silver Beaver medal in June of 1970. Reed was a Dad for 67 years and is survived by his wife Velma (Mecham) Ford, his daughter Coleen (Peter) Nielsen, his three sons, Kraig R (Brenda), Roger R (Jill), and Mark R (Jill), twenty-four grandchildren, and twenty-four great-grandchildren. He is preceded in death by his parents, siblings, his daughter Sheri (Ford) O’Driscoll, his grand-daughter Misty O’Driscoll, and his great-grandson Ashton Birk. Funeral services will be held Tuesday, December 29th, 2015 at 1:00 PM in the Wallsburg LDS Chapel, 494 W Main Canyon Rd, Wallsburg, Utah. Viewing will be held from 11:30 AM-12:30 PM prior to services at the LDS Church. Interment will follow the services in the Wallsburg Cemetery. Condolences maybe shared online at www.probstfamilyfunerals.com

Reed Ford, age 93, was born on August 11, 1922, in Wallsburg, Utah to Alfred Ford Jr. and Molinda Boren. He passed away Christmas Eve peacefully in his home surrounded by his family. Reed was raised in Wallsburg, which was a place he held... View Obituary & Service Information

The family of Reed Ford created this Life Tributes page to make it easy to share your memories.

Send flowers to the Ford family.