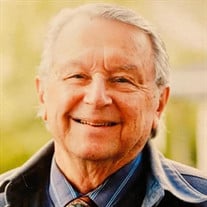 Raymond Louis Mayo was born on September 6, 1932, in Longview, Texas to Harry Mayo and Lena Alvina Heene. He passed away on April 26, 2022, in Provo, Utah surrounded by his family who sang him into the next life with the songs of Zion that he... View Obituary & Service Information

The family of Raymond Louis Mayo created this Life Tributes page to make it easy to share your memories.

Send flowers to the Mayo family.