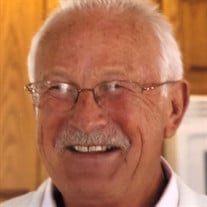 Randall L. Kutschkau was born July 5th 1943 to Esther and Gene Kutschkau in North Loup Nebraska. He passed away at his home unexpectedly on July 9th 2020. Randy attended Grand Island Senior High graduating class of 1961, he then joined the United States Marine Corps in 1961-1965. In June of 1966 he married Jolyne Johnson they had two children Kristi Kutschkau Medley and Kevin Kutschkau, Jolyne passed away in June of 1979. On 9/10/11 he married Sarah MacIsaac, she proceeded him in death on February 8th 2020. Randy enjoyed his Harley, trips to Lava Hot Springs, concerts in the park, gardening and all his dogs. If you drove down Center Street in Midway, Utah you were probably greeted with a SLOW DOWN as you drove by. Randy enjoyed playing softball and played until the age of 70. He was competitive in nature and always liked to win. Randy enjoyed his trips back home to Nebraska, time on the lake at Lori’s, he never missed his class reunions. He also liked the sun in Puerto Vallarta, Mexico and snow skiing in the winter in Park City, Utah. Randy is survived by his daughter Kristi Jo (Andy) Medley, his son Kevin (Kris) Kutschkau, grandchildren Tristi (Matt) Rutter, Brock Budd, Kroydon Kutschkau, Keaton Kutschkau, and 9 great grandchildren. Stepchildren Amanda MacIsaac (Tony) Riccio, Mathew MacIsaac (Erin) and granddaughter Scotland Sue MacIsaac, his nephews Trevor Petzoldt and Steven Russell. He is also survived by his sister Lori Petzoldt, his brother Lonny (Karen) Kutschkau. Randy was proceeded in death by his parents, spouses, his grandson Kai Randall Kutschkau and brother-in-law Roger Petzoldt. Private family services will be held at a later date. In lieu of flowers donations can be made in Randy’s name at Paws for Life. Friends and family may visit the online guestbook and share a memory of Randy at www.probstfamilyfunerals.com

The family of Randall Lee Kutschkau created this Life Tributes page to make it easy to share your memories.

Send flowers to the Kutschkau family.