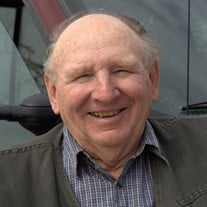 Ralph B Sorensen 84, passed to his eternal home on May 22, 2016. He was born to Burtice J and Leyle Viola Sulser Sorensen on April 1, 1932 in Talmage, UT and welcomed into the family by three sisters Donna, Marvel and Faye. He spent his early childhood there. As a teen his family moved to the Heber City area and settled in Midway, UT. He attended and graduated from Wasatch High School. He married his high school sweetheart, Colleen Pitts in 1950.Their marriage was solemnized later in the SLC LDS Temple. They had seven children; Debra, Brad, Randall (Teresa), Scott (Sheri), Russell, Christine, Paul (Lynae). Colleen died in 1971. He married Jeanne North the following year in the Provo Temple. He moved his dairy and farming operation to Lewiston, Ut. Ralph and Jeanne have five children; Burke (Alison), Natalie (Nathan Noyes), Amy (Edred Strong), Weston (Melanie), Chase (Nahomi). He was an active member of the LDS church and served as a Bishop in Lewiston. He was grateful and honored that he was able to support 7 sons and 1 daughter on LDS missions. In 1994, his dairy and farm operation was sold and the family moved to Smithfield, UT. He continued to farm, buy and sell cattle until he was 80 years old. In 1964 he was named Utah Farmer of the Year, and sold several Holstein bulls to Curtiss Breeding. He loved to attend his boys sports events, hunt deer, ride horses and 4wheelers and go camping in the mountains that he loved with his children and grandchildren. He is an awesome person, the hardest worker we ever knew and has been thanked by countless young men for teaching them how to work. He is loved by his family andwe will miss his influence in our lives every day. He is survived by his wife Jeanne, his 12 children listed above, 35 grandchildren, 22 great grandchildren, sister Marvel. He was preceded in death by wife Colleen, parents, sisters Donna Buehler and Faye Fitzgerald. A special thanks to Autumn Care and Hospice for their loving compassion and care for Ralph. A viewing will take place at Smithfield South Stake, 250 E. 450 S. on Thursday May 26, from 6:00-8:00 pm. Funeral services on May 27, 1:00 pm, 1060 S. Center Street, Midway, UT. Viewing from 11:00-12: 30. Internment in Midway, UT. Condolences maybe shared online at www.probstfamilyfunerals.com

Ralph B Sorensen 84, passed to his eternal home on May 22, 2016. He was born to Burtice J and Leyle Viola Sulser Sorensen on April 1, 1932 in Talmage, UT and welcomed into the family by three sisters Donna, Marvel and Faye. He spent his early... View Obituary & Service Information

The family of Ralph B. Sorensen created this Life Tributes page to make it easy to share your memories.

Send flowers to the Sorensen family.