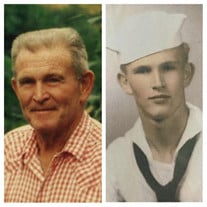 Ralph Charles Lewis, born 23 June 1927 in Salt Lake City, Utah, died Tuesday morning, 27 November 2018, in his home in Timber Lakes Estates, Heber, Utah, of causes due to age. He is preceded in death by his parents, Ralph Lionel Lewis and Marjorie Done, his wife of 69 yrs, Elizabeth Hope Schnetz, their daughter Marjorie Louise, two still born daughters, Susan Irene and Carol Elaine, and one great grandson, Josh Lewis. Ralph is survived by three daughters, Pamela Hope (Chris) Edler, of Port Townsend, Washington; Loretta Lee (Mark) Mikolyski of Durant, Oklahoma; Deborah Elissa Lewis of Palm Springs, California; and one son, Ralph Edward Lewis of Heber, Utah; 17 grandchildren, 34 great grandchildren and two great, great grandchildren. Ralph served in the United States Naval Service, receiving his training at the U.S. Naval Air Technical Training Center in Memphis, Tennessee where he developed a great love for flying. Upon his discharge from the naval air service, his interest in flying took him into the aviation industry for 48+ years, first as a hobby, then working as Airport Manager for two different regional airports, FAA Certified Airplane Mechanic with A&P License, operating his own aircraft repair business, private pilot and more. Ralph had a great love for music. He learned to play the trumpet while in high school and developed a singing voice early in his adult life. Ralph and Elizabeth raised their family in Southern California. Later they moved to Utah, Idaho, and back to Utah living in Woods Cross and finally Heber. Ralph retired in his dream location where he built his log cabin, and he could look out his picture window and see trees and blue sky for miles. He also designed and built a log cabin mail house for the Timber Lakes community. As an active member of The Church of Jesus Christ of Latter-day Saints, Ralph loved and dedicated his life to his faith sharing his musical talent many times over the years in various capacities including the ward choir. His most recent favorite experience was directing the music in his ward with his own unique unconventional style creating the need for all to follow his direction. His other callings include stake missionary, Sunday School superintendent, gospel principles teacher, bishop, and Salt Lake Temple Square tour guide. He also served in the Salt Lake Temple on a weekly basis for several years. Funeral services will be held Wednesday, 5 December 2018, at The Church of Jesus Christ of Latter-day Saints chapel at 6250 East 1200 South, Heber, Utah. A viewing will be held from 12:30 to 1:30 pm at this location and the funeral service will be at 2:00 pm. The interment will immediately follow at the Heber City Cemetery.

The family of Ralph Charles Lewis created this Life Tributes page to make it easy to share your memories.