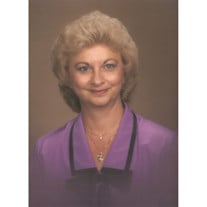 Bunny Pressgrove, also known as Raedell, 76, was released from her earthly body early Sunday evening. She suffered a fracture to her pelvis and after a brief stint in the hospital, her body simply could not keep up with her mind and her heart. She has joined our father, Edgar Hey Pressgrove Jr, on the heavenly dance floor, and has been reunited with her mother and dad. Bunny was born August 31, 1940 to Myrla and Phil C. Bunn. As an avid seamstress and online video gamer (yes, you heard us correctly), she was always doing something. She simply could not stay idle. If you knew her, even briefly, you know that she always had something to say, and it was usually full of sass and wit. She was a true character and one of a kind. Her best career was as a mother and domestic engineer. Bunny loved to travel and see the world having been raised as an Air Force Brat. She met & married Major Edgar Hey Pressgrove Jr. in 1958. They had 5 children. Katherine (Byron) Cheatwood, Edgar Hey Pressgrove III, Susan (Bill) Fox, Lisa Pressgrove, & Ali Pressgrove. She is survived by her four daughters, for whom she set the stage for success in life, and taught them to be bold, to be strong, to be loud and never settle. She was constantly doing everything she could to make things work, no matter the circumstance. She is also survived by her brothers, Philip and Gary, numerous grandchildren and great-grandchildren, and never will a day go by that the memories we have of her are not shared with them as they grow. She will be deeply missed by all who have had the pleasure of knowing her. She was preceded in death by her mother, father, husband & her son. Funeral services will be held at 1:30 P.M. on Monday, August 21, 2017 at Heber Valley Funeral Home (288 N. Main St., Heber City, Utah) with a visitation prior to the funeral from 1-1:30 P.M. Interment will follow in the Midway City Cemetery.

Bunny Pressgrove, also known as Raedell, 76, was released from her earthly body early Sunday evening. She suffered a fracture to her pelvis and after a brief stint in the hospital, her body simply could not keep up with her mind and her heart.... View Obituary & Service Information

The family of Raedell "Bunny" Pressgrove created this Life Tributes page to make it easy to share your memories.

Send flowers to the Pressgrove family.