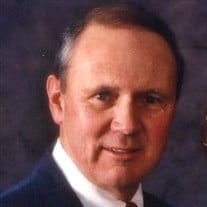 Philip Murdock Lawson, 78, passed away peacefully September 10, 2016 at his home in Heber City, after a valiant struggle with Parkinson’s Disease. Phil was born on January 14, 1938 in Heber City, Utah. He was the son of Bob and Mary Lawson. He graduated from Wasatch High School in 1956 and served in the United States Navy from 1955-1958. He married his high school sweetheart Carol Herron in 1960. They were later sealed in the Salt Lake LDS Temple. They are the parents of one son and three daughters. He was an owner at Wasatch Auto Supply where he enjoyed working for 45 years. He also loved serving as a volunteer fireman for Wasatch County for 30 years where he was captain from 1981-1987. One of Phil’s greatest loves throughout his life was playing golf. A highlight was getting a hole-in-one in 1991. He especially enjoyed being a volunteer marshal for the Wasatch Mountain State Park after retirement. He spent many years traveling with his beloved wife and many close friends, where they were fortunate enough to see beautiful sites in many countries around the world. Other favorite past times were playing billiards, boating, and attending many years of sporting events at Wasatch high school. He was a member of the Church of Jesus Christ of Latter Day Saints where he served faithfully in many callings. One of his favorite callings was serving with his wife as a senior missionary couple at the Heber Valley girls camp for two years. Most of all, Phil loved his family and spent countless hours doing things for and with them. He was a loving husband, father, and grandfather to fourteen grandchildren and six great-grandchildren. He is survived by his wife Carol; his children Cindy (Glenn) Hatch, of Logan, UT; Jeff (LaTrenda) Lawson, of Mesa, AZ; Nancy (Tann) Tueller, of Logan, UT; Amy (Dave) Park, of Highland, UT; and two sisters Patricia Provost and Janette West. He was a hard worker and was always there to help anyone in need. He was truly loved by all who knew him. Funeral services will be held Saturday, September 17th, 2016 at 12:30 p.m., at the Heber 1st ward chapel (325 East 500 North, Heber City, UT). A viewing will be held prior to the services from 10:00 a.m.-12:00 p.m. Interment will be at the Heber City Cemetery.

Philip Murdock Lawson, 78, passed away peacefully September 10, 2016 at his home in Heber City, after a valiant struggle with Parkinson&#8217;s Disease. Phil was born on January 14, 1938 in Heber City, Utah. He was the son of Bob and Mary... View Obituary & Service Information

The family of Philip Murdock Lawson created this Life Tributes page to make it easy to share your memories.

Send flowers to the Lawson family.