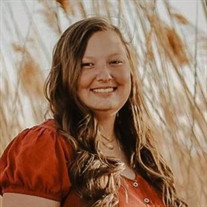 Payton Caldwell our loving, fun, caring and let's admit it a little sassy and stubborn daughter passed away in a car accident on Monday, June 7 in Heber City with one of her besties Emma Call. Payton was born in Salt Lake City, UT December 5, 2002 to Darrin and Jennifer Caldwell a whopping 9 pound 3 ounce bundle of joy. Payton always excelled in everything she did! When she wanted to conquer something, she would set goals and get it done. From an early age she was very athletic and normally did 2-3 sports a year. She started with tumbling when she was 10 and did that for about 4 years. She placed in all events at many local tumbling meets. But the highlight was when she was the state champion in double mini, which took her to Las Vegas for regionals where she placed 2nd, and on to nationals. Beginning in 6th grade, she was a natural at volleyball and played on numerous club teams. She made her high school team as a freshman and continued to play all 4 years. She was a two year varsity letterman and named regional academic all-state. She loved basketball and played for about 3 years making her freshman team, but learned sometimes you can't do it all. Being so strong she tried her hand at Track and Field. But, she would always laugh and say "I am definitely not a runner, who wants to run and throw up? Us throwers get to eat!" She was so excited to be asked to be team captain for the throwers her senior year. She excelled at discus and shot put. She was a 3 year letterman in discus and likely would have been a 4 year had covid not shut everything down. This year she excelled in discus and placed at 2 of the major invites. To our surprise at the regional championship she got her PR and took 5th place which moved her onto the state championships, she was so excited! She placed in the top 20 at state. She was also named regional academic all-state for track. You would think that would be all the sports she could handle, but 3 years ago she decided to try skeleton which terrified her mother! Who wants to see their daughter racing head first at 80 mph hour down a little icy track? Her calm demeanor and athletecism made her a natural. She placed 1st twice in the winter games for her age group. Her ultimate dream was to become an Olympian, she was going to continue skeleton in college. She received a 4 year Fellows academic scholarship to SUU and qualified for the Regent’s Scholarship. She was very honored to be awarded the Old Mill Elementary School Foundation Scholarship. She was offered a Presidential Scholarship to Snow College and others to UVU and Dixie. She graduated with 27 college credits and a 3.97 GPA, 2 CTE pathways (nursing assistant and medical assistant), state photography certificate, state child development certificate. She worked hard in her Spanish classes and earned her Seal of Biliteracy, which means she was fluent in Spanish. She was involved in the HOSA Club, Interact Club, and Honors Society. Payton wanted to continue to help people by having a career in the medical field in psychology and nursing. She was an active member of The Church of Jesus Christ of Latter-day Saints, and had recently graduated from seminary. Payton started working when she was 10 years old helping out in the Papa Murphy's pizza trailer and spent many summer days at events working with her family. When Payton turned 14 she started working at Deer Valley Resort in the Guest Service Department, with her dad and her brother. Later her sisters joined in and her mom was also there but in a different department. It's family thing! She was recently recognized for her 5 years of service. She loved her Deer Valley family and will be dearly missed by them. She was also one of the "unsung heroes" in the medical field during COVID working as a CNA at Spring Gardens Care Center. She comforted many of our senior citizens that couldn't be with their own families during the pandemic. It was a difficult but rewarding job. She is now reunited with a few of them that she took care of. She was also an avid animal lover and wanted to bring home every stray animal she ran across even though she was allergic to most of them. Her cats Winston and Leonard are already missing her. She was a friend to all who knew her and a peace maker. She is proceeded in death by her grandparents Sharol and Dennis Cornaby, Bryce and LuRae Caldwell, and Ronald Barkley. She is survived by her parents Darrin and Jennifer and her siblings Dakota, Maranda and Sharaden Caldwell. She is also survived by her Nana and Papa, Marion Barkley Hardin and Randal Hardin. And many aunts, uncles, and cousins who will miss her dearly. The visitation will be be held from 6:00-8:00 PM on Monday, June 14th at the Heber Stake Center at 150 N. 200 W., Heber City, UT. An additional visitation will be Tuesday from 9:00-11:00 AM followed by the funeral service also at the Heber Stake Center. Those who wish to join by zoom, please follow this link: http://zoom.us/j/4356545458 We would like to extend a sincere thank you family, friends, and the community for your support during this difficult time.

Payton Caldwell our loving, fun, caring and let's admit it a little sassy and stubborn daughter passed away in a car accident on Monday, June 7 in Heber City with one of her besties Emma Call. Payton was born in Salt Lake City, UT December 5,... View Obituary & Service Information

The family of Payton Caldwell created this Life Tributes page to make it easy to share your memories.

Payton Caldwell our loving, fun, caring and let&#39;s admit it a...

Send flowers to the Caldwell family.