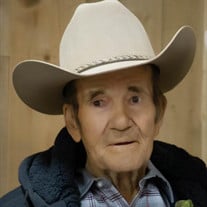 Our beloved father and grandfather, Paul Dee Butters, passed away Thursday, November 4th peacefully at his home in Wallsburg, Utah at the age of 89. Paul was born on February 18, 1932 and spent his youth in the Heber/ Wallsburg area where he would later meet his future wife Mary Young. Paul and Mary were married on January 11th 1952 and settled in the Wallsburg valley where they were blessed with 5 sons and had a wonderful 56 years together. He enjoyed camping with his family in the Uinta Mountains and on The Glade above Wallsburg. He enjoyed hunting, and fishing along with tending for his sheep. He liked traveling with his late wife and collecting different rocks and other interesting items. Never turning down an opportunity for work. Paul worked as a logger and sheep herder as a young man. He later would come to work for the State of Utah doing road construction where he eventually retired from. Paul was especially good at telling stories which would bring everyone around to hear him. One of our greatest memories we will forever cherish is how he use to sing a song a song about a small dog and ice cream cone to the grandkids as they all giggled. He enjoyed a good western, black licorice, always had a diet coke in his hand and would never turn down a good potato salad. His personality and gentle nature drew many to him and he will be greatly missed. Preceding him in death were his wife Mary and his infant son, Rodney Butters. His parents Pauline Fausett Butters & Vernon H Butters stepfather George Mayberry. His siblings Jim Butters, Donna Newcomb and Emma Joan Barnes. He is survived by his four children Brent (Stephanie) Butters, Craig (Merilyn) Butters, Mark (Heidi) Butters and Stacey (Tammy) Butters. 14 grandchildren, 15 great-grandchildren and his sister Sharon Evans. He is very much loved and will be greatly missed. Our consolation is in knowing that he is with his wonderful wife and family watching over us. There will be a viewing, Wednesday, November 10th from 9:30am to 10:30am, followed by funeral services at 11:00 am at the Wallsburg 1st Chapel, 494 West Main Canyon Road, Wallsburg, Utah. Interment will follow and be held at the Heber City Cemetery.

Our beloved father and grandfather, Paul Dee Butters, passed away Thursday, November 4th peacefully at his home in Wallsburg, Utah at the age of 89. Paul was born on February 18, 1932 and spent his youth in the Heber/ Wallsburg area where he... View Obituary & Service Information

The family of Paul Dee Butters created this Life Tributes page to make it easy to share your memories.

Send flowers to the Butters family.