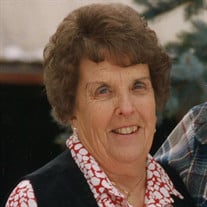 Norma Jean Sondregger Fitzgerald 18 December 1928 – 17 January 2017 Did you hear it? The choir of angels that undoubtedly sang as our Grandma entered heaven in the early morning hours on Tuesday, 17 January 2017? We know Grandma joined the choir as she was reunited with Grandpa and her family. Norma was born at home in Midway, Utah, to her loving parents Frederick and Marion Sondregger. The early death of her parents (both died by the time she was 17), undoubtedly shaped her life. Her brothers and sisters helped raise her (her brother Ray helped her pick out her Prom Dress!) until she met and married the love of her life, Don Fitzgerald, proving that true love does exist, and in the end, that you can , in fact, die of a broken heart. Grandma was fierce about family and her beliefs, and was unabashed about speaking her mind. She was, almost covertly, incredibly self-sufficient. While Grandpa ran the sheep, Grandma ran the business. She was accountant, cook and janitor, and was a partner to Grandpa in every way. The kids loved her lamb chops, chili, and puffed rice balls at Halloween, and certainly enjoyed her terrifying fear of getting her hair wet during the inevitable Fitzgerald water fights. While a dedicated partner, Grandma also carved out a niche for herself. She was a long-time president of the Utah Wool Growers. She loved to sing and treasured her time as a soprano in the Wasatch Choralettes and as a member of a six-woman choir in the Francis Utah Ward. She held numerous positions in the church, and was dedicated to, and strived to live, the principles of the Mormon Church. Norma proved her tough stubbornness by outlasting nearly all her immediate family…she is preceded in death by her parents, brothers and sisters, and her husband of 62 years. Her legacy lives on via her son, Steven Fitzgerald, five Grand Children, five Great Grand Children and countless nieces and nephews, cousins, friends and neighbors Grandma touched in her 88 year life. We miss you Grandma, and wish we could be there to watch the reunion. We want to thank LaNae Fitzgerald and Elk Meadows for all their care. Funeral services will be held Saturday, January 21, at 11:00 a.m. in the Francis LDS Chapel (387 W. Last Frontier Lane, Francis Utah). Viewings will be Friday, January 20 from 6:00-8:00 p.m. and before the funeral from 9:30-10:30 a.m. both at the Francis LDS Chapel. In lieu of flowers, please make donations to the Primary Children’s Hospital.

Norma Jean Sondregger Fitzgerald 18 December 1928 &#8211; 17 January 2017 Did you hear it? The choir of angels that undoubtedly sang as our Grandma entered heaven in the early morning hours on Tuesday, 17 January 2017? We know Grandma joined... View Obituary & Service Information

The family of Norma Jean Sondregger Fitzgerald created this Life Tributes page to make it easy to share your memories.

Send flowers to the Fitzgerald family.