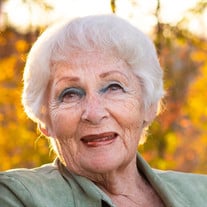 Merilyn Flora Luke Stanfield Urry, age 84, passed away peacefully in her home on August 22, 2019 in Midway, Utah. She was surrounded by loved ones. She was born February 12, 1935 in Twin Falls Idaho to Ottosen Luke and Edna Dillon Luke. She grew up in Twin Falls, Idaho. Merilyn had many gifts, mostly surrounding music and the arts. Merilyn attended BYU and majored in Music. As a young adult she was part of a professional singing quartet called the “Mam’selles”. They toured the US performing and had a few records. She has great memories from those years. In 1960 Merilyn married DeVon Stanfield in the Idaho Falls Temple. They lived in Hollywood, California where DeVon owned a film production studio, Destiny Pictures. In 1967 DeVon died in a tragic accident, leaving Merilyn a young widow at the age of 32 with four children and one on the way. After a family meeting with her siblings, it was decided that Merilyn would take a few classes at University of California in Berkley to earn her bachelor’s degree so she could become an elementary school teacher and support her family. Once she earned her degree she became a kindergarten teacher in Dublin California. It was at this time in her life that she met her cherished sweetheart and eternal companion, Roger Urry. Roger had 4 children from a previous marriage. They were married August 1, 1970 with a blended family of 9 children. Tragically, In 1971 Merilyn lost her 6-year-old son, Rustin, in a fire. In 1978 Roger & Merilyn moved to Midway, Utah. They grew their family, adding 3 more sons. Their “His, Hers & Ours” family was an adventure, to say the least. Merilyn & Roger became heavily involved in the community, volunteering countless hours with the Swiss Days program as well as Swiss Bells, Midway Boosters, Swiss Christmas, 4th of July Sunrise Service and in many other capacities. In 2007 they were the “Honored Citizens” for Swiss Days. Merilyn is a devoted member of the Church of Jesus Christ of Latter-day Saints. She has served in hundreds of ways, mostly in a musical capacity. Merilyn has personally arranged dozens of pieces of church music and hymns and has several original compositions. She is known throughout the church and community for organizing, directing or producing plays, programs, choirs, road shows, and other entertainment. Merilyn was actively involved in the politics and served as the president of the Utah Federation of Republican Women from 1994-1995. She served as a delegate for the state of Utah and has attended many Utah and United States goverment functions, inaugurations and balls. Merilyn was preceded in death by her son, Rustin Stanfield as well as her sister, Rosalind Luke Crosby and brothers Donald Luke and Noel Luke, and daughter-in-law, Sue Thornton Urry. Merilyn is survived by her husband Roger Urry, and her children and stepchildren: Kelly Stanfield, Denise Stanfield Cummings (Kasey), Jennifer Stanfield Ruff (Larry), DeVon Stanfield, Nathan Urry (Galena), Jason Urry (Jenny), Kimball Urry (Melinda), Gordon Urry, Robbie Urry, Randy Urry; brothers Steve Luke (Joanie), Arlo Luke (Jackie), and Roice Luke (Nedra); 22 grandchildren and 8 great-grandchildren. Because of conflicts with Swiss Days, funeral services will not be held in Midway. Viewing to be held Friday, August 30 from 6-8 p.m. at Heber Valley Funeral Home 288 N. Main Street, Heber, UT 84032. The funeral service will be held on Saturday, August 31. Viewing at 10:00 a.m., funeral at 11:30 a.m. at the Charleston LDS chapel located at 3450 South 3500 West, Heber (Charleston). Graveside service will be immediately after at the Midway Cemetery. Merilyn was dearly loved and will be greatly missed.Condolences may be shared online at www.probstfamilyfunerals.com.

Merilyn Flora Luke Stanfield Urry, age 84, passed away peacefully in her home on August 22, 2019 in Midway, Utah. She was surrounded by loved ones. She was born February 12, 1935 in Twin Falls Idaho to Ottosen Luke and Edna Dillon Luke. She... View Obituary & Service Information

The family of Merilyn Flora Luke Stanfield Urry created this Life Tributes page to make it easy to share your memories.

Send flowers to the Urry family.