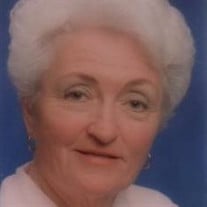 Maxine Lucy Zawodniak (née Metcalf) died peacefully on Wednesday, 12 April 2017 in American Fork, Utah due to age-related causes. She was 88. Maxine was born 6 April 1929 in Richfield, Idaho, 11th and last child born to Levi Gregory Metcalf and Lucy Deseret Warren. She married Raymond Eugene Adams in 1949. They had one son, Danny Ray Adams, born 1 June 1951 in Oakland, California. They divorced, and Maxine married John Walter Zawodniak Jr. on 21 March 1964 in Reno, Nevada. Their marriage was solemnized in the Oakland LDS Temple on 15 May 1965. Their son Danny Adams was sealed to them on 19 August 1972. John and Maxine have been married for 53 years. Maxine’s vocation was over 32 years with Pacific Telephone Company as a long-distance operator, Yellow Page sales, business officer, and marketing representative. Her avocation was genealogy and particularly theater. She has directed many plays and LDS road Shows over the years. She was especially proud of serving as assistant director of the Oakland Temple Pageant, a long-running LDS presentation in Northern California. Maxine lived many years in California and Utah, and has been a resident of Charleston (Heber City) Utah for 30 years. Maxine was preceded in death by her Son Danny Ray Adams, as well as her parents and all ten of her Metcalf siblings. These were Levi Warren, Max Frank, Utahna May, Harris Blaine, Melissa Jane, Claris Hazel, Samuel Grant, Paul Gregory, Lois Helen, and Monte Eugene. She is survived by her husband John Walter Zawodniak of American Fork and a grandson Robert Jorgenson of Eagle Mountain. There will be a viewing for Maxine on Tuesday, 18 April from 6 to 7:30 PM at the Probst Family Funeral Home, 79 E Main St in Midway Utah.  The funeral will be Wednesday, 19 April at 11 AM at the Charleston Ward of The Church of Jesus Christ of Latter-Day Saints, 3450 S 3500 W Charleston (Heber City) Utah. There will also be a viewing prior to the funeral, from 9:30 to 10:30 AM at the Charleston building.  Interment will be at the Springville Evergreen Cemetery.

The family of Maxine Lucy Zawodniak created this Life Tributes page to make it easy to share your memories.

Send flowers to the Zawodniak family.