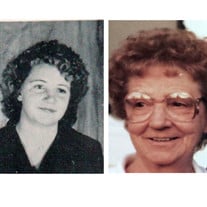 Marvel Betty Sorensen Kohler, age 90, passed away November 10, 2017. Marvel was born January 3, 1927, to Burtice and Leyle Sulser Sorensen in Midway, Utah. She spent her younger years growing up in Talmage, Utah, where she attended school. She was the Vice President of her class in 1945. Marvel married Glen Albert Kohler on January 5, 1946, and they resided in Heber City. Glen died in 1966. Their marriage was later solemnized in the LDS Temple. Marvel was an active member of the LDS Church and worked as a visiting teacher. Marvel worked as a waitress in local restaurants for many years. She enjoyed making quilts and crocheting afghans for her family. She was an excellent housekeeper and hosted many family gatherings. She relocated to Evanston, Wyoming, due to failing health. Marvel is survived by her sons: Larry (Maureen) of Walla Walla, WA; Don (Dana) of Evanston, WY; twelve grandchildren; and 23 great-grandchildren; nieces and nephews. She was preceded in death by her parents; husband, Glen; son, Ronnie; daughter, Bonnie; three grandchildren; one great-grandson; brother, Ralph Sorensen; sisters, Donna Buehler and Faye Fitzgerald. Funeral services will be held at 11:30 a.m. on Friday, November 17, 2017 at the Heber 7th Ward LDS Church, located at 240 E. 400 S., Heber, with a viewing one hour prior to the service. Burial will be in the Heber City Cemetery. Thank you to Tender Heart Assisted Living and Rocky Mountain Care for the care they gave Marvel.

The family of Marvel Betty Sorensen Kohler created this Life Tributes page to make it easy to share your memories.