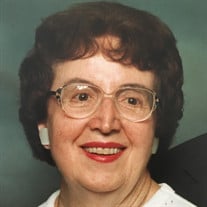 Madelyn Probst Nichols was born on January 15, 1931 with her identical twin, Marilyn, in Midway, Utah. On July 18, 2017, at the age of 86, she passed away peacefully at her home in Midway, Utah. Madelyn and Marilyn grew up on their father’s farm in Midway. After graduating from Wasatch High School, Madelyn and Marilyn attended LDS Business College. They then worked together as secretaries at the headquarters of the Church of Jesus Christ of Latter-day Saints in downtown Salt Lake City. They both cherished their time working with many of the general authorities of the church. Eventually, Madelyn met her sweetheart, LaMarr Nichols and they were married on August 22, 1966 in the Salt Lake Temple. Just last year, 2016, they celebrated together their 50th wedding anniversary with an open house for family and friends at the Midway Town Hall. Madelyn quit her secretarial career at the Church to be a full-time wife and mother. In 1970, she and LaMarr built their home in Midway near her childhood home where she lived for the rest of her life. At a relatively young age, Madelyn was diagnosed with cancer, which she has fought bravely for nearly 40 years. Her determination to push through trials and go on living have been a powerful example to her family and friends. At age 58, Madelyn and Marilyn returned to school. They both earned associate degrees from Brigham Young University. Later, she and LaMarr accepted several mission calls, serving as the Office Couple in the Knoxville, Tennessee Mission, Church Employment Center, and the Missionary Training Center. Although we will miss Madelyn dearly, she is undoubtedly thrilled to be reunited with Marilyn. Madelyn will be remembered by those who knew her for her strength of character, her testimony of the gospel of Jesus Christ, and her determination to faithfully endure to the end. Madelyn is survived by her faithful husband, LaMarr, her three children, Steven (Kristine), Mark (Carrie) and Annette (Bart), and 14 grandchildren (3 of whom are currently serving missions for the LDS church). Brothers: Gene and Glen, and sister: Joyce. She was preceded in death by her parents, Karl and Carrie "Cree" Probst, her twin sister, Marilyn, her sisters: Beatrice and Nila and her brothers: Bernard, Ray, and Norman. Funeral services will be held at the Midway Stake Center, 165 North Center Street, Midway, Utah at 11:00 a.m. on Saturday July 22, 2017. Viewings will be held from 6:00 p.m. – 8:00 p.m. on Friday July 21 and before the funeral on the Saturday July 22, from 9:30 a.m. – 10:30 a.m. at the Midway Stake Center, internment will take place following the funeral service at the Midway City Cemetery.

Madelyn Probst Nichols was born on January 15, 1931 with her identical twin, Marilyn, in Midway, Utah. On July 18, 2017, at the age of 86, she passed away peacefully at her home in Midway, Utah. Madelyn and Marilyn grew up on their father&#8217;s... View Obituary & Service Information

The family of Madelyn Probst Nichols created this Life Tributes page to make it easy to share your memories.

Send flowers to the Nichols family.