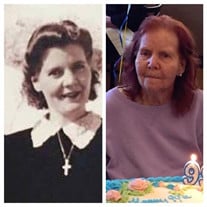 Mabel Elaine Mair Martinez was born April 11, 1917 to Andrew and Myrtle Young Mair in Heber City, Utah. She peacefully passed away September 2, 2016 at the age of 99 in Centerville, Utah. Mabel grew up in a log house in Heber City. She had four brothers, Marlowe, Ernest, Loren, and Darrell (Buck) and a beloved sister, Daphne. Mabel and Daph were inseparable as sisters. They loved and cared for each other and for each other’s families, like their own. Mabel met and married Alphonzo (Fonce) Martinez in Park City, Utah. They were married on November 25, 1933, and were blessed with two children, Richard and Deanna. They made their home in Park City, for many years, before later moving to Heber City. Mabel was a hard worker and would take on any job. She retired from the Park City School District. Grammi was a strong willed woman who was not afraid to tackle any task or take on any injustice. She loved her family fiercely and spent countless hours with her grandchildren, great grandchildren and great -great grandchildren. She was the life of any family gathering and even though we thought we couldn’t be surprised by something she said or did, invariably we were. She kept us on our toes and we loved her for that. Mabel was a member of the Church of Jesus Christ of Latter Day Saints. For years, she taught the three year old primary class every Wednesday while living in the Park City 1st Ward. She loved and had a testimony of her savior, Jesus Christ. Mabel is survived by a large posterity including son and daughter-in-law Richard and Leona Martinez; grandchildren, Deanna (Arlen) Welch, Jana Rae (Tom) Grose, Richard (Carol Lee) Martinez, Vincent Clark (Cindy) Martinez, Crae (Cheryl) Martinez, Robyn (Melanie Hamilton) Martinez, Cori Ann (Roman) Stepek, Trent (Natasha) Martinez, Holly (Kyle) Taylor; 29 great grandchildren, 44 great-great grandchildren and one great-great-great grandchild, born the day of her passing. She is also survived by many nieces and nephews who loved her dearly. She was preceded in death by her husband Fonce, her infant daughter Deanna, her parents, her brothers and sister, and her great-grandchildren, Elisha and Josh Martinez. In keeping with Grammi’s wishes a family gathering will be held at the Probst Family Funeral Home, 79 East Main Midway, UT. Interment Heber City Cemetery.

Mabel Elaine Mair Martinez was born April 11, 1917 to Andrew and Myrtle Young Mair in Heber City, Utah. She peacefully passed away September 2, 2016 at the age of 99 in Centerville, Utah. Mabel grew up in a log house in Heber City. She had... View Obituary & Service Information

The family of Mabel Elaine Mair Martinez created this Life Tributes page to make it easy to share your memories.

Send flowers to the Martinez family.