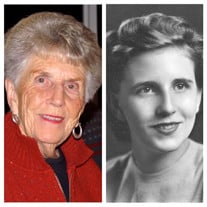 Lorraine Hawley Buys was 100 years young. In her lifetime, she knew family members who made the Mormon pioneer trek West (her two great-grandmothers and a great-grandfather) – as well as great-grandchildren born in the digital age. Her life spanned two world wars and numerous other regional conflicts … many that touched her personally … and the Great Depression. She died in Heber City, Utah, just five days after celebrating her 100th birthday with family and friends. Born November 21, 1917, in Kanosh, Utah, to Charles Byron and Afton George Hawley, Lorraine was almost called Elaine. At church, just before she was blessed, her parents changed her name to Lorraine – after the French Alsace Lorraine region where one of the first battles of World War I was fought. Lorraine’s early years were spent on her father’s ranch in Central, Utah. She graduated from Richfield High School. Lorraine married the first love of her life, Joseph Harry Buys, and while moving from army post to army post, their family became complete with four boys. They were stationed in Japan, Montana, Kansas, Washington, Washington D.C., California, Alaska and Texas. Family was always a priority. Nothing made her happier than a visit from her own four boys, her nine grandchildren and fifteen great-grandchildren. Lorraine was proud of her pioneer heritage. An active member of Daughters of the Utah Pioneers, she shared her ancestor’s stories in the many talks she gave throughout the Salt Lake Valley. Lorraine is survived by her sons: Richard M. (Sue), Joseph H. (Kathleen), George W., James B. (Tracie), nine grandchildren and fifteen great-grandchildren. Her husband, parents, brother George Byron Hawley and great-granddaughter Eleanor Marie Buys preceded her in death. The family would like to thank the staff members of the Abbington and Encompass Home Health and Hospice for their warm, loving kindness and care during Lorraine’s stay with them. A Memorial Service will be held at 1 p.m. on Wednesday, November 29, 2017 at Heber Valley Funeral Home in Heber City, Utah for family and friends. A visitation will be from Noon – 1 p.m. prior to service. Interment will immediately follow at Fort Douglas Cemetery, Salt Lake City, Utah.

Lorraine Hawley Buys was 100 years young. In her lifetime, she knew family members who made the Mormon pioneer trek West (her two great-grandmothers and a great-grandfather) &#8211; as well as great-grandchildren born in the digital age. Her... View Obituary & Service Information

The family of Lorraine Hawley Buys created this Life Tributes page to make it easy to share your memories.

Lorraine Hawley Buys was 100 years young. In her lifetime, she...

Send flowers to the Buys family.