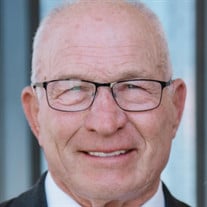 Lewis Wayne Chappell suffered a heart attack and passed from this life to a better one on April 28, 2022, in Heber City, UT. He was 77 years old. Lew was born in Salt Lake City on January 16, 1945, to Leah (White) and Charles Wayne Chappell. He grew up in the Sugarhouse area where he enjoyed spending time playing sports and hunting. He graduated from Highland High School in 1963. He married Retta Jean Gundersen on August 23, 1968, in the Salt Lake Temple. Together they were blessed with 5 children; their sons, Wayne (Nancy), Blake (Debbie), Jacob, and Seth (Rachael), and their daughter Emily (Justin Twitchell). They have 25 amazing grandchildren. His greatest joy was his family. Shortly after his marriage, Lew was drafted into the army and served a short tour in Vietnam. While attending the University of Utah he started his own business which became Chappell Construction and later Chappell Log Homes. All of his children and some grandchildren spent their summer breaks working with him and he loved the opportunity to spend time with them. He employed many who needed the work. Lew did what he loved for 50 years and worked hard to his very last day. Lew was a member of the Church of Jesus Christ of Latter-day Saints and served faithfully as Bishopric Counselor, Bishop, Stake Presidency Counselor, Young Men's President, High Counselor, and Stake Missionary. He loved serving and being with the youth of the church. He planned and went on countless camping and bike trips, hikes, and other youth activities. His influence and enthusiasm for life was contagious. Lew’s most powerful lesson was to serve God by serving others which he taught by example. He served a mission for the church to the Central States Mission. In later year Lew and his wife also served in the Richmond, Virginia Mission and the Provo, Utah Mission. He recently finished a service mission with the addiction recovery program. His desire was to serve and help others come to the Savior and find joy. He is preceded in death by his parents, Wayne Chappell and Leah White. He is survived by his Wife Retta, Children Wayne (Nancy), Blake (Debbie), Jacob, Seth (Rachael), Emily (Justin), his 25 Grandchildren, and Sisters Mary Whitesides, Elaine (Gaylan) Nielson and Liz (Robert) Ence. A viewing will be held from 10:00 AM – 11:45 AM on Friday, May 6, 2022, with a funeral service to follow at 12:00 PM at the Lake Creek 2nd Ward, 6250 East 1200 South, Heber City UT, 84032. Interment at Heber City Cemetery In lieu of flowers please donate to Latter-Day Saint Charities https://www.latterdaysaintcharities.org/about-us?lang=eng Or the American Heart Association. To stream the services live, please visit: https://www.youtube.com/c/LakeCreek2ndWard/videos

Lewis Wayne Chappell suffered a heart attack and passed from this life to a better one on April 28, 2022, in Heber City, UT. He was 77 years old. Lew was born in Salt Lake City on January 16, 1945, to Leah (White) and Charles Wayne Chappell.... View Obituary & Service Information

The family of Lewis Wayne Chappell created this Life Tributes page to make it easy to share your memories.

Lewis Wayne Chappell suffered a heart attack and passed from...

Send flowers to the Chappell family.