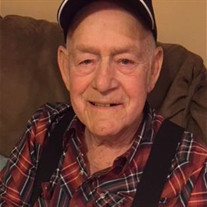 Leslie Sherman Olsen - Son, Husband, Father, Grandfather and Great- Grandfather, passed away on Monday, March 19, 2018. He was born to Edward Glenn and Irma Olsen on June 17, 1938 in Upalco, Utah. He was one of seven children. Les lost his father at a very young age. Awhile after his Father’s death, his Mother moved her family to Heber City. He left home at twelve to work on the farms of different families. They would give him work and a place to stay. All of the money he earned he gave to his widowed mother to help her raise her family. He married Joyce Houtz on August 14, 1957. They were later sealed in the Salt Lake City Temple. Joyce passed away on December 4, 2014. Joyce and Les were blessed with five children: Lori Storey (Randy) deceased, Lisa Provost (Steven), Bradley Olsen (Kristen), Brian Olsen deceased and Jason Olsen (Brandi). He also had 12 Grandchildren and 8 Great-grandchildren. Les started driving truck at the age of 16. Throughout his career as a Truck Driver he met many close friends. After his retirement, Les worked at Flaming Gorge as a camp host. He and Joyce enjoyed many summers there. While there, they also made many friends, which added to his life greatly. Because of his easy-going nature and ability to tell a good story Les was loved by many. Les is survived by his siblings Faye Casper and Gladys Gee, his three children Lisa, Brad and Jason, grandchildren and great-grandchildren. Preceded in death by parents, wife Joyce, children Lori and Brian, brother Darr, sisters Joy Mendenhall, Mary Lillis Cummings, baby sister Sherry. The funeral will be held at The Heber City 1st Ward 325 East 5th North on Friday, March 23, at 12:30 with the viewing starting at 10:30am. Burial will be in the Heber City Cemetery.

Leslie Sherman Olsen - Son, Husband, Father, Grandfather and Great- Grandfather, passed away on Monday, March 19, 2018. He was born to Edward Glenn and Irma Olsen on June 17, 1938 in Upalco, Utah. He was one of seven children. Les... View Obituary & Service Information

The family of Leslie Sherman Olsen created this Life Tributes page to make it easy to share your memories.

Send flowers to the Olsen family.