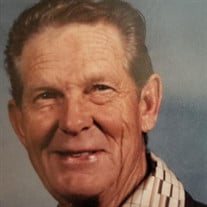 We are deeply saddened to announce the passing of Leonard Cuillard, on January 26, 2022, he sadly passed away at the age of 91. Leonard was born on February 5, 1930, to Elizabeth Knight and Charles Cuillard, in Park City, Utah. He attended school in Park City and Heber City. Leonard also proudly served his country in the Korean War. He married the love of his life, Lennis Wilde, on September 18, 1954. They celebrated 67 years of a beautiful life together. In the early years of their marriage, they traveled around the country doing construction jobs. He was a member of the Local Three Operating Engineers Union from 1954 to 1992, until he retired. In 1968, the Cuillard’s returned to Heber and purchased land in Daniels where they raised their family, animals and hay. Farming was a passion of his. Leonard was preceded in death by his mother and father, his sisters Matilda Mair, Hazel Lewis, and daughters, infant baby, and Gayleen (Lee) Wright, nephews and nieces, Rammond (Karolee) Mair, Karol Kae Wilde, Sherida Wilde, Ruth Anderson, Donna (Chuck) Souls, and David Mair. He is survived by wife Lennis, daughter Bonnie (Bill) Maggiora, son Kent (Terrie) Cuillard, grandkids Hollie (Josh) Ames, Joshua Davis, Jasha Lindsay (Courtney), and Trevor Lindsay, nieces and nephews, Stan (Edith) Mair, Gale (Debbie) Mair, Cray Carpenter, Glade Carpenter, Kevin Wilde, Sandra (Kevin) Leatham, Deb Siddoway, Connie Lee, Diana- Raie Lewis, Colynn Sumut, Doc Wilde, and 9 great grandkids. Leonard was a hard worker, amazing husband, father, grandfather and provider. He loved to have a spot of tea, and color with his great granddaughter Kaidence. Grandpa, we love you a Bushel and a Peck and a Hug Around the Neck, See ya in the movies. We would also like to thank everyone for their love and support at Spring Gardens, and the hospice team for their care of Leonard as well. Graveside Services with Military Honors will be held on Friday, 4/29/2022 at 11:00 AM at the Heber City Cemetery, 680 N 550 E, Heber City, UT 84032.

We are deeply saddened to announce the passing of Leonard Cuillard, on January 26, 2022, he sadly passed away at the age of 91. Leonard was born on February 5, 1930, to Elizabeth Knight and Charles Cuillard, in Park City, Utah. He attended... View Obituary & Service Information

The family of Leonard Russell Cuillard created this Life Tributes page to make it easy to share your memories.

We are deeply saddened to announce the passing of Leonard Cuillard,...

Send flowers to the Cuillard family.