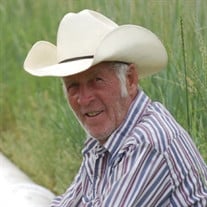 LaVerl D. Mecham also known as Rick, passed away at the age of 74, September 13, 2014 at his home in Wallsburg, UT. He was born November 22, 1939 in Salt Lake City, UT to Dazel A. and Enid Clayburn Mecham. He lived in Bingham Canyon, UT. Later moving to West Jordan UT. He attended Elementary in West Jordan and Jordan High School. Even as a young boy he was always a hard worker. He picked sugar beets, corn, and tomatoes. He worked at Howell Dairy while he attended High School. At the age of 17, he went to work at Gallagher Freight Line in Salt Lake City, working on the dock. He married JoLene Edwards on December 26th, 1958 in Kearns UT. Later he drove truck locally for Consolidated Freightways where he retired after 37 years of loyal service. Rick and JoLene moved to Wallsburg in 1982. They have always loved it there and have been proud to call it home. Rick is the father of four wonderful children Brenda (Jody) Gustafson, Rick (Marcia) Mecham, Angie (Chris) Christofferson all of Wallsburg, UT. And Jodie (Allen) Rasmussen of Lehi UT. He is the proud grandpa of 16 grandchildren and 14 great grandchildren, with one on the way. Rick was diagnosed with cancer in 2007, he faced it bravely and continued to work hard on his farm and helping others. Rick and JoLene were sealed together along with their four children in the Mt. Timpanogos Temple on February 21st 2009, after 50 years of marriage. Rick has always been willing to help others. He has served in several callings for the Church of Jesus Christ of Latter Day Saints. He had a strong Testimony of the gospel, and was very instrumental in guiding others. Some of his passions and hobbies included working with his son in his construction business, making him feel accomplished and giving him many opportunities to make new friends. In December 2013 he had to submit to what the cancer was doing to his body. Rick is survived by his wife, JoLene of 55 years, their four children and their spouses, 15 grandchildren, 14 great grandchildren, (almost 15) sister Barbara Warner (Ross) Melville, of Fillmore, UT. He is preceded in death by his parents, one grandson, Brandon Leavitt, and Sister Louise Johnson. A viewing will be held Tuesday, September 16th, 2014 at the Wallsburg 1st Ward house (494 W. Main Cyn. Rd. Wallsburg) from 6-8 pm. A viewing will also be held on Wednesday, September 17th, 2014, same location from 9:30 – 10:30 am. Funeral services to follow at 11:00 am. The family would like to thank the many friends and family who have been so kind at this difficult time. They also appreciate the kind hospice nurses and staff, Audrey, Kristen, Carol, and Diane at Intermountain Homecare. In lieu of flowers, in honor of Rick do a kind deed for another.

LaVerl D. Mecham also known as Rick, passed away at the age of 74, September 13, 2014 at his home in Wallsburg, UT. He was born November 22, 1939 in Salt Lake City, UT to Dazel A. and Enid Clayburn Mecham. He lived in Bingham Canyon, UT.... View Obituary & Service Information

The family of LaVerl (Rick) D. Mecham created this Life Tributes page to make it easy to share your memories.

LaVerl D. Mecham also known as Rick, passed away at the age of...

Send flowers to the Mecham family.