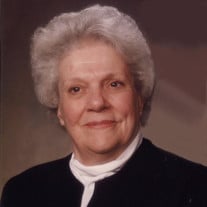 Our loving mother, grandmother, and great-grandmother, Lala Manning Bodine Hatch, passed away peacefully on October 21, 2018. Lala was born in International Falls, Minnesota on November 14, 1925 to Wesley Clark Manning and Blanche Corraine Stebbins. At age 19, Lala joined the Church of Jesus Christ of Latter Day Saints after meeting Reid Jay Bodine who was serving as a missionary for the Church in Minnesota. After his mission Reid returned to Minnesota to court Lala. Lala later moved to Arizona and lived with Reid’s parents until they could be married in the Mesa Temple on May 21, 1945. Reid and Lala lived in Phoenix for 20 years before moving their family to Midway, Utah where they bought the Johnson Flour Mill. Reid passed away in 1972 and Lala moved to her present home in Heber City. Twenty-five years of widowhood ended when she met Leo Hatch and she welcomed him and his children into her life. After Leo passed away in 2005 she has had a quiet life filled with service and love. Her life was defined by her faith in Jesus Christ. Lala was a devoted member of the Church and has served in various positions including an ordinance worker at the Provo Temple for 17 years. Her greatest joy in life was her family and serving others. Lala is preceded in death by her two husbands, Joby Sweat (daughter), Jamaica Sweat (granddaughter), Whitney (granddaughter), Amanda (granddaughter), Nyals (grandson), and Dorthy Mae (sister). Lala is survived by her children, Tamlyn (Tim) Heaton, Jay Bodine, Grant (Terri) Bodine, Kirk Bodine, Gregg Bodine, Kevin Sweat, son-in-law, 18 grandchildren, and her two sisters Bayne Brown and Evelyn Frarck. She is also survived by Leo’s children that she loved like her own, Karolee Mair (deceased), Dixie Mair, Michael Hatch, Marc Hatch, and Kent Hatch. Funeral services will be held on Thursday, October 25, 2018 in the Heber 4th Ward building at 240 East 400 South, Heber City, Utah. The visitation will be from 9:00 a.m. to 10:30 a.m. Services will be held at 11:00 a.m. Interment will be in the Midway cemetery following the services. In lieu of flowers please to contribute to Arborday.org or www.audobon.org

The family of Lala Bodine Hatch created this Life Tributes page to make it easy to share your memories.

Send flowers to the Hatch family.